Karski & Beyond, inspiring change through the power of street art

A mural eight meters wide and fifteen meters high immediately catches the eye. This makes the murals by Karski & Beyond, and the message they convey, so powerful. With their new mural in The Hague, Karski & Beyond want to show that everyone can be a change maker. “We hope that all people who look up at our painting realise that they too can do something for the world.”

For more than twenty years, artists from The Hague, Karski (Roy Valk, 1974) and Beyond (Roelof Schierbeek, 1983) have been working on graffiti. A search for excitement and adventure led to both picking up the aerosol cans for the first time at a young age. It started as a mischievous prank (in Dutch, “kwajongensstreek”), but now their colorful murals, in which abstraction is combined with realism, have been praised worldwide.

“The uniqueness of our art form is that it is visible to everyone. No one can ignore it. Graffiti is one of the biggest art movements ever and our reach is enormous. ”

Both Karski & Beyond have a background in graphic design and have been working together since 2012 to create impactful murals around the world. Their aim is to put a smile on the faces of passers-by: “The uniqueness of our art form is that it is visible to everyone. No one can ignore it. Graffiti is one of the biggest art movements ever and our reach is enormous. ”

And they are only too happy to use this wide range. Karski & Beyond are not just about creating a pretty picture, but instead they consider themselves as modern storytellers: “We want a story represented on our walls that touches people and makes them think. Every time people walk by our walls, they see something different. This involves everyone in our story. ”

The strength of their murals can be seen in a project the duo carried out in Zimbabwe. “Together with children who were cared for by child protection in Zimbabwe, we made a large mural on a wall that is almost one kilometer long. We challenged the children to draw themselves how they see themselves in the future: boys drew pilot suits and girls portrayed themselves in beautiful dresses. We painted large portraits of children who were having a hard time on the wall. With just paint, aerosol cans  and a fun day you can make so much impact and give children enormous power.”

“We want a story represented on our walls that touches people and makes them think.”

Their murals have a lasting effect in the area where they were sprayed. On the Laakweg in The Hague, Karski & Beyond have transformed four large, gray, brick walls into colorful works of art. “We have cheered up a gray neighborhood enormously, this still makes the residents smile. People came to us every day and it surprised us how much impact we made. Residents were proud of their neighborhood for the first time. ”

The Mural of Change

To use the enormous expressiveness of their murals even more, Karski & Beyond started a project together with Justice and Peace. A huge mural will be sprayed on a high wall of the building of The Hague University of Applied Sciences, on which three important human rights defenders will be portrayed. “The Hague, one of the Shelter Cities of Justice and Peace, is the city of peace: the international tribunal is located here and our city is known as the place where justice triumphs. It was therefore more than logical to get our message out here. ”

The choice to portray on the mural young climate activist Greta Thunberg, indigenous rights defender Berta Cáceres from Honduras and human rights defender Vitali Safarov, partner of Shelter City in Georgia, was made during a brainstorming session with students from The Hague University of Applied Sciences. “The students were silent when Justice and Peace told stories about the human rights defenders they work with. It made an impact.”

“But it was even more striking during this brainstorming session how deeply students feel involved in combating climate change. ‘If we don’t have a planet we can live on, it makes no sense,’, the students said. We hadn’t even thought about global warming, but preserving our climate is indeed a human right. That is why there is a clear layer in our painting that has to do with nature.”

As a young climate activist that has become famous in the last few years, Greta Thunberg is known to the general public, but Berta and Vitali may not be known by most people. That is not justified, say Karski & Beyond: “Many human rights activists are unknown to most of the people, while they are fighting so hard for our rights and putting their lives on the line. Both Berta and Vitaly have lost their lives fighting the violation of human rights in their country.” Berta fought for the rights of indigenous communities in Honduras, and in the mural she symbolises the changes that one person can achieve when action is taken. Vitali was a human rights defender from Georgia who believed passionately in acceptance and tolerance and supported other human rights defenders at risk. He was unjustly killed when standing up against discrimination.

“We want these human rights defenders to be honoured and to keep their legacy alive, so that new generations feel called upon to change something, no matter how big or small their action.”

“And still, many human rights violations occur daily. We want these human rights defenders to be honoured and to keep their legacy alive, so that new generations feel called upon to change something, no matter how big or small their action.” The painting by Karski & Beyond shows that everyone can be a change maker, no matter how young you are or what you fight for. “The young generation has a fresh energy and therefore the power and energy to commit. Just look at how much decisiveness and dedication Greta Thunberg shows. We hope that everyone who walks or cycles past our mural will stop and think about it. ”

Karski & Beyond hope that this mural will kick off more impactful murals in all Shelter Cities in the Netherlands, so that residents of the cities see that their city is a safe home for human rights activists from all over the world. 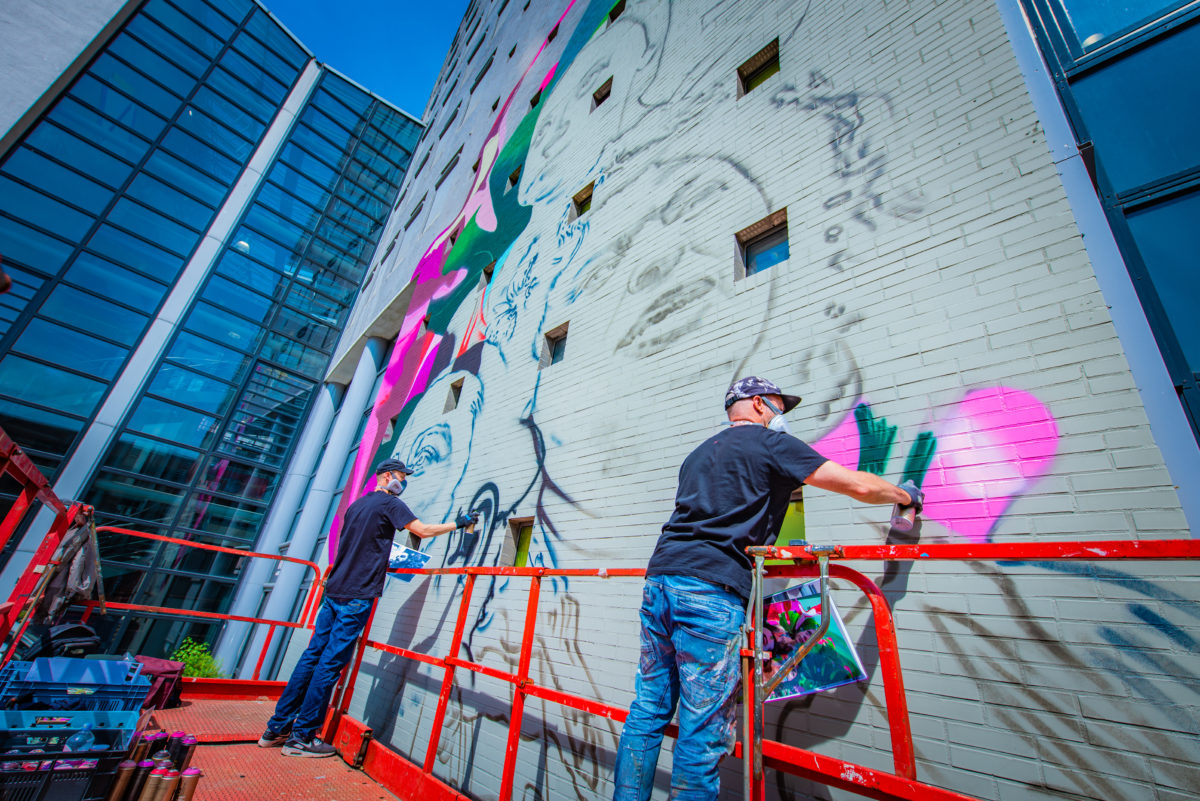