The Martin Luther King Lecture is an annual event aimed at promoting Martin Luther King’s legacy and, as such, contributing to a just society. The lecture is organised by Justice & Peace and the Vrije Universiteit (VU) Amsterdam, and supported by The Hague University of Applied Sciences and the VU Association.

Martin Luther King Jr. (1929-1968) was an American Baptist minister, a prominent member of the Civil Rights Movement, and a strong advocate of peaceful resistance. In 1955, he was one of the organisers of the boycott of city buses in Montgomery, Alabama, as a protest against the racial segregation in public transport. He also led the mass-demonstration in Washington D.C. on the 28th of August 1963. This is where he gave his world-famous ‘I have a dream’-speech. In 1964, King received the Nobel Peace Prize, and the following year he received an honorary doctorate from the VU Amsterdam. He was shot in Memphis on the 4th of April 1968, when he was 39 years old.

“Tell them about the dream!” 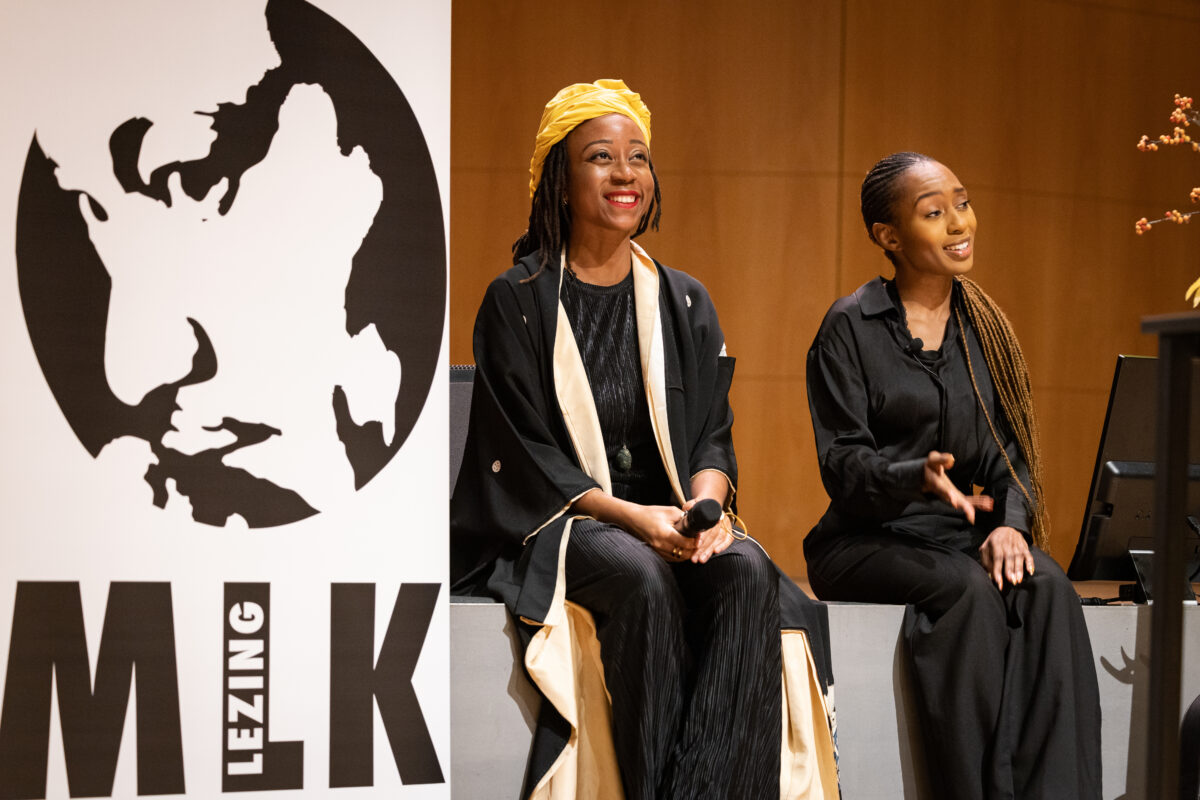 On Wednesday, the 7th of December, the Martin Luther King lecture was held at the Lighthouse, Hague University of Applied Sciences. During this engrossing evening with inspiring guests, captivating live performances and powerful words, we reflected on the necessity of civil disobedience and the inspiring shapes it may take in the past and present. The annual Martin Luther King lecture speech was given by Clarice Gargard, journalist, programme-maker, filmmaker and writer. In her speech, ‘Why, resistance?’, Clarice emphasized the core role of resistance and of knowing and respecting one’s self and history. Additionally, the revolutions happening worldwide, being ‘woke’, and the ‘cancel, accountability and call out culture’ were touched upon, while she also reflected on the road to liberation and transformation.

“You may well ask, “Why direct action? Why sit-ins, marches, etc.? Isn’t negotiation a better path?” You are exactly right in your call for negotiation. Indeed, this is the purpose of direct action. Nonviolent direct action seeks to create such a crisis and establish such creative tension that a community that has constantly refused to negotiate is forced to confront the issue. It seeks so to dramatize the issue that it can no longer be ignored…. I have earnestly worked and preached against violent tension, but there is a type of constructive non-violent tension that is necessary for growth.”

How do you make injustice visible? How do you uncover the blind spot of the people for structural and institutional racism, without using violence? ‘Hello?! See and feel what happens and how that is!’. Martin Luther King jr. stimulated civil disobedience: remarkable actions that create uncomfortable and tense situations, and thus stimulate thought and confront the people. Peaceful and creative actions that try to navigate from confrontation to empathy and dialogue, with in the end, positive change.

You can find the script in Dutch and English here:

On Thursday 28 October, the Martin Luther King lecture was held at the VU University Amsterdam, this year as part of the Black Heritage Night. During this inspiring evening with interesting guests, impressive live performances and powerful words we reflected on the dark pages of the slavery past and it’s impact, but we also celebrated black heritage. The annual Martin Luther King Lecture was given by Jennifer Tosch, founder of Black Heritage Tours in Amsterdam, New York and Brussels. Co-founder of the Sites of Memory Foundation and member of the Mapping Slavery Project Netherlands. In her lecture, Tosch emphasised the role of women in activism. For although women’s voices were barely heard in the past, history teaches us that they stood up for their rights.

In 2020 we organized an online edition on the 10th of December, on the International Day of Human Rights. The 2020 lecture was broadcasted live from The Hague and consisted of a spoken word competition, performances and a lecture by Dr. Wes Bellamy, former Deputy Mayor of Charlottesville USA and author of “Monumental: it was never about a statue”. The theme of the lecture was “We cannot walk alone”, a quote from the famous ‘I have a dream’ speech by Martin Luther King in 1963. A statement that fits well with 2020, a year in which worldwide and in the Netherlands division and violence flared up, but people and movements are also looking for connection. The lecture was organized in collaboration with VU University Amsterdam, The Hague University of Applied Sciences, Student Association Tribez and Museum Sound & Vision The Hague. Soon a video will be published on our social media channels with all the highlights of the event. You can watch the entire lecture via this link on Crowdcast.

Black, white, and everything in between – we need to learn to live in harmony rather than opposition. Martin Luther King had a dream: that people would no longer be judged by the colour of their skin. Until his assassination in 1968, King was the leader of the American Civil Rights Movement. This movement ensured the acquisition of voting rights for African-Americans. King’s most famous words were “I have a dream”, but he also said “We cannot walk alone” – referring to the need for people of all colours to join hands in the non-violent fight for civil rights. With his peaceful protests, he even received the Nobel Peace Prize. The statement “We cannot walk alone” was the theme of the competition and all the spoken words were judged by an expert jury; chairman Elten Kiene (Spoken Word artist), Hella van der Wijst (TV host and producer), Shanica Romney (board of the student association Tribez) and Domenica Ghidei (board of the Martin Luther King lecture Foundation).

We received many entries and the quality was very high, so the jury was faced with a difficult choice. In the end, 4 participants were selected who received a prize for their contribution, namely Achi Chioma (incentive prize), Myron Hamming (3rd prize), Benzokarim (2nd prize) and the winner of the competition was Amara van der Elst. All four of them performed their Spoken Word speech live to the public during the event. You can watch the Spoken Word lectures via this link.

“Even if you are not concerned with racism, racism is concerning you”
Jerry King Luther Afriyie

The idea for the Martin Luther King Lecture was born in November 2007, during a visit of King-biographer Clayborne Carson and Mark Gonnerman (both from Stanford University). Following this, Theo Wierema, director of De Boskant, took the initiative to organise an annual MLK Lecture, and he invited Jacob Bouwman from the Vrije Universiteit (VU) Amsterdam to be his partner. It made sense to involve the VU, due to the honorary doctorate that Dr. King received there in 1965. This honorary doctorate still inspires the VU in its inclusive approach to diversity. The project pays homage to King’s views and ideas, born from the conviction that these are still of social relevance.

In December 2012, both partners founded the Martin Luther King Lecture Foundation. Since 2013, all lectures are organised by this foundation. And since 2016, Justice and Peace became the organising partner instead of De Boskant. In The Hague, Justice and Peace is collaborating with the Haagse Hogeschool. 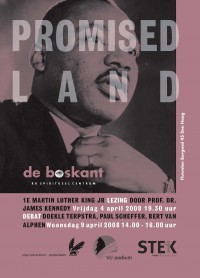 The MLK lecture exists since 2008. Until 2016 it was organized by Foundation r.k. Spiritual center De Boskant in The Hague and VU University Amsterdam, then by Justice and Peace Netherlands and the VU, united in the Martin Luther King Lecture Foundation. 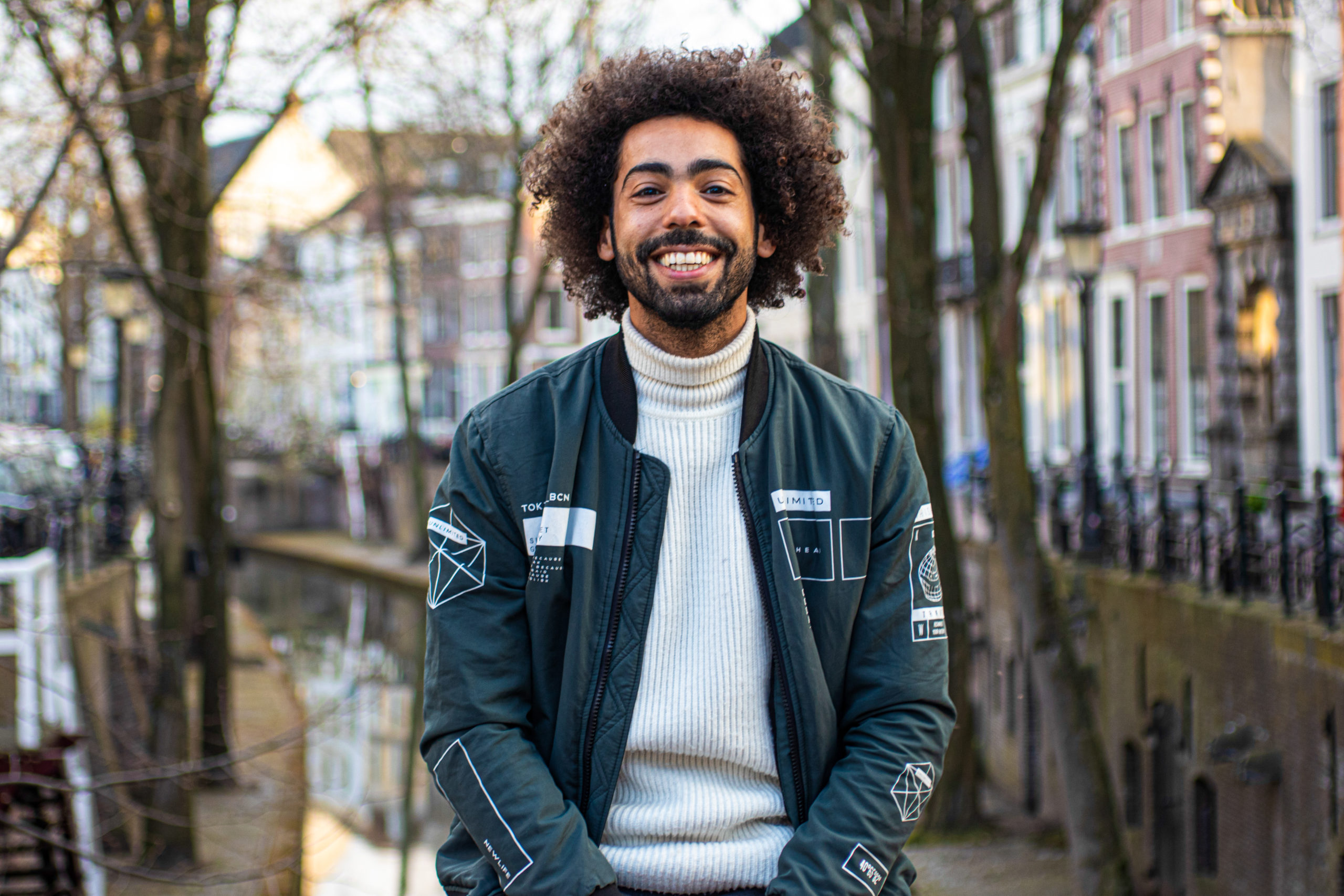 With the spoken word in his mind and heart Myron Hamming travels through the country. He moves audiences with the poetry he entrusts to them. From his pen onto paper, from his lips like music; his love for language sounds through in every sentence and every gesture. 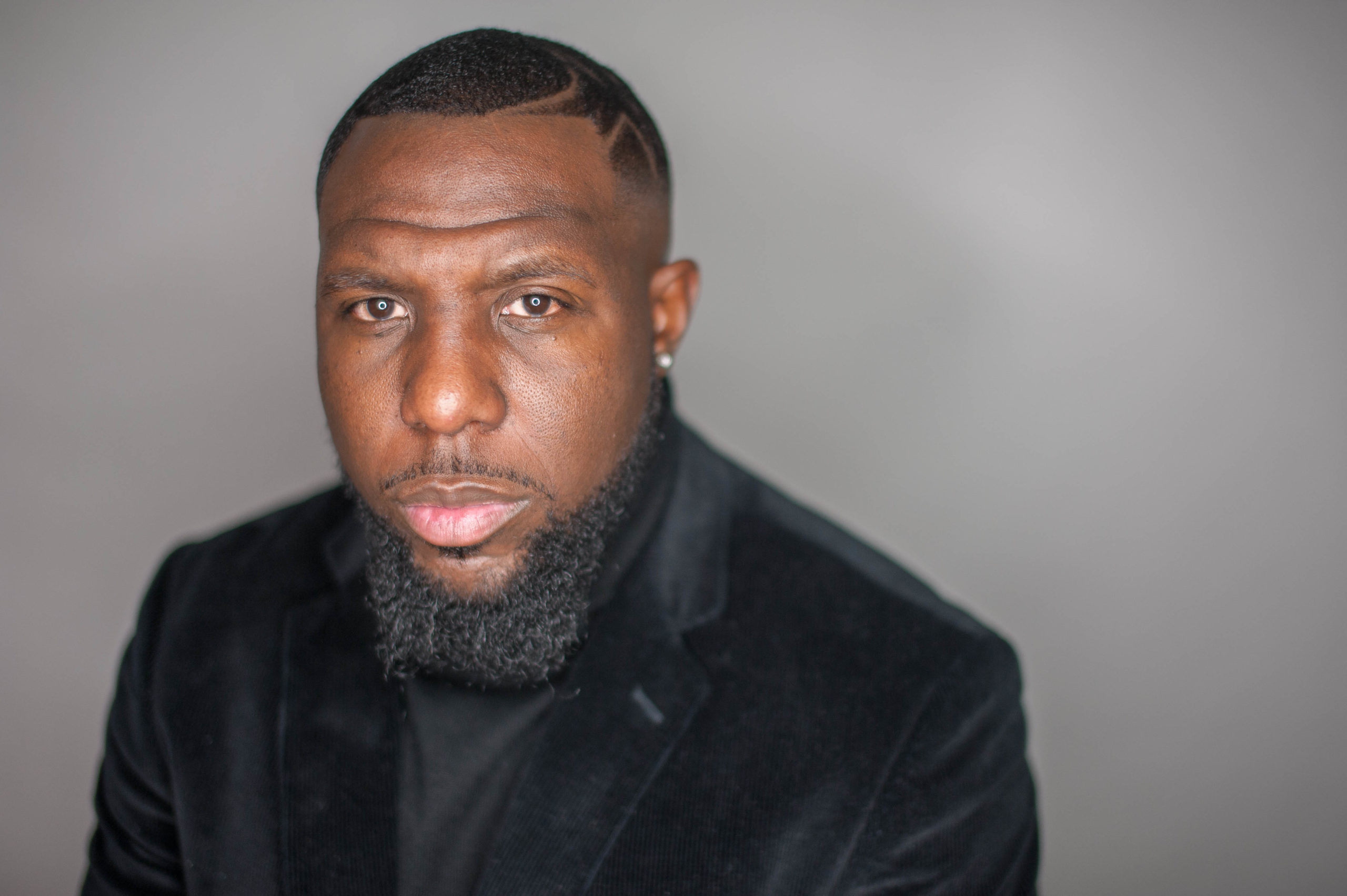 Dr. Wes Bellamy is co-founder of Our Black Party in the United States and author of the book “Monumental: it was never about a statue”. During his tenure as Deputy Mayor of Charlottesville, Virginia, Dr. Bellamy has been active for equal rights for black citizens in his city and has had several successes. 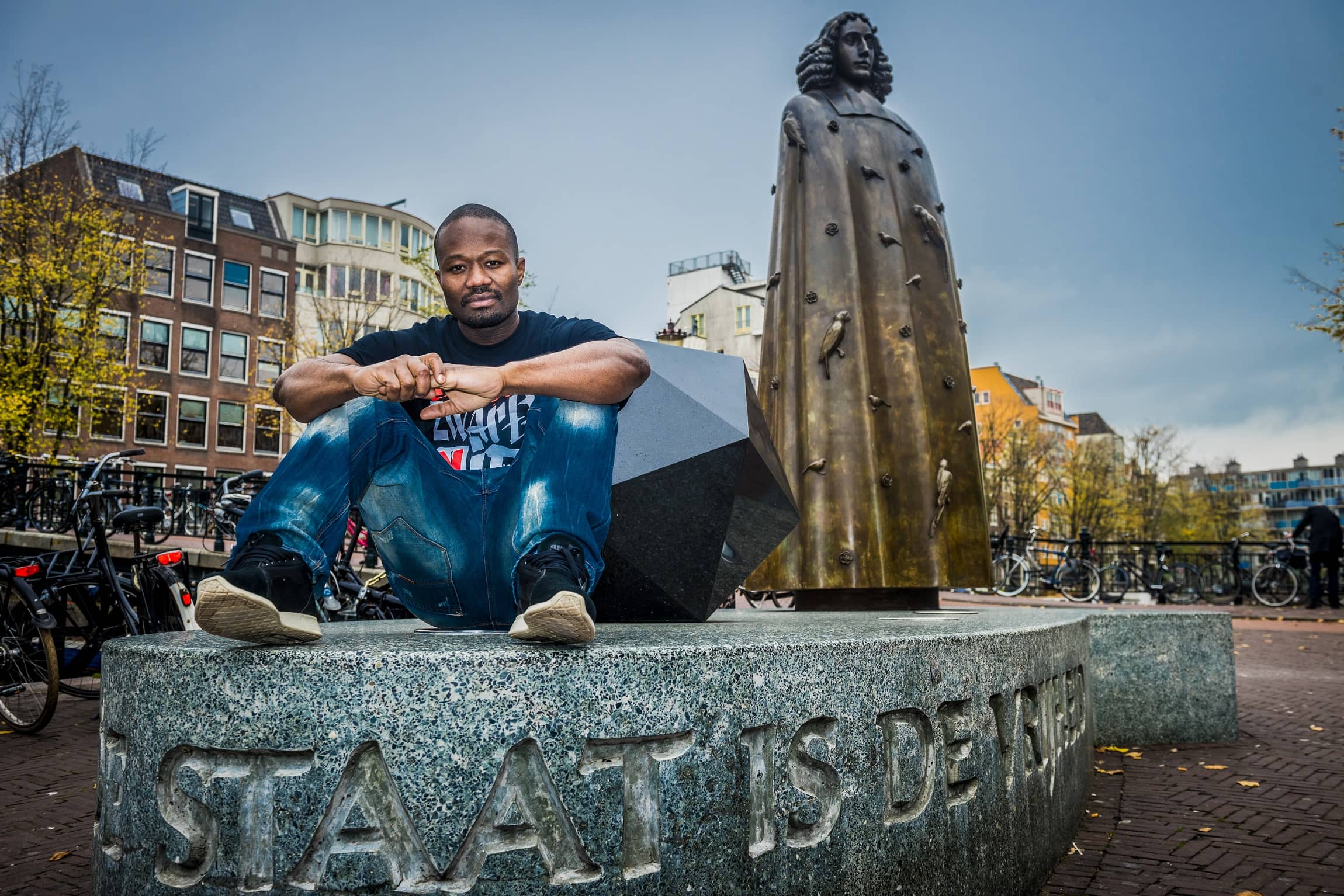 The question I am often asked is: “Why are black activists in the Netherlands so negative? Why are they not optimistic? “Followed with:” Look at Humberto Tan, Jörgen Raymann and Simone Weimans. Be grateful that you can live in the most tolerant and peaceful part of the world.”