Muriel, connects Arabic and Dutch culture as a community builder of Samen Hier

Growing up in a small village in the Dutch region of the Achterhoek, a city like Amsterdam quickly feels like a different world. “I used to go to Amsterdam with a friend, with train tickets from Kruidvat (a Dutch pharmacy). There you would meet a lot of different people, from different backgrounds, with different styles. Fascinated by this place, Muriel den Brummelhuis from Winterswijk moved to Amsterdam on her eighteenth birthday to study Arabic. But life had more in store for her. For and during her study she left twice to a real metropolis: Cairo in Egypt. It was a dream come true. All her life she had had an interest in other cultures, countries and languages. “That trip made me grow up.” Currently, Muriel contributes to the Samen Hier initiative in the role of community builder, in which she supports two groups in The Hague, and bridges the gap between Dutch and Arabic languages and cultures.

“I always felt like the odd one out, because I liked weird things”, she explains. “The fact that I studied Arabic was considered out of the ordinary by many people in my surroundings”. But for Muriel, it was a logical choice. She was interested in other countries and languages, and had an ear for languages. “I knew, in any case, that I wanted to study a language. Arabic speaks to the imagination, exactly because it was framed negatively in the media in that time. That made me curious, and triggered me to investigate it”.

Other childhood experiences, too, played a formative role and brought her to where she is today. “I came into contact with refugees at an early age, and with that also with the asylum system in the Netherlands and inequalities. I had a best friend from Azerbaijan and a friend from Afghanistan. I came over to their place often, also when they still lived in asylum reception centres”.  Those experiences left a deep impression on her. “Those friends lived with many other families in one home, very different than my family did. Sitting in the living room, you spoke to people from a variety of countries and heard foreign languages. It has shaped me.”

“Sitting in the living room, you spoke to people from a variety of countries and heard foreign languages. It has shaped me” 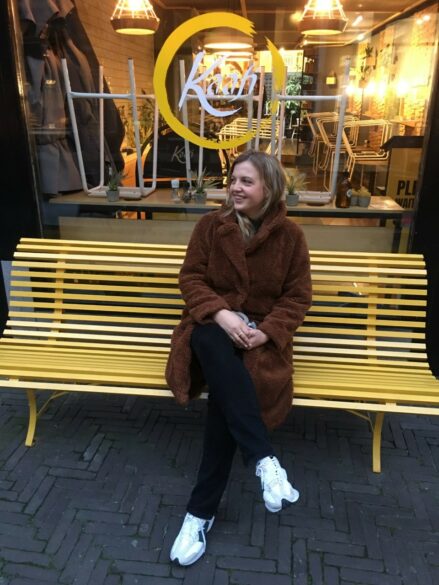 Integrating in The Hague

These experiences and her love for foreign languages and cultures have always stayed with her. During her studies she lived (among other places) in Egypt and completed an internship at the embassy in Morocco. When she moved to The Hague for a new job, she decided to contribute to her new city. “Because of moving from Amsterdam to The Hague, I had to find my own way in a new city. This volunteer work as a community builder is a great way to integrate yourself, as well as a way to support others in their integration process.”

This interplay is central to the work of the Samen Hier welcome groups. Samen Hier is an initiative based on the community sponsorship model, in which locals form a group with a newcomer and as such ensure integration and a safe haven. “It really is an exchange, and comes from both sides”.

“This volunteer work as community builder is a great way to integrate yourself, as well as a way to support others in their integration process.”

As a community builder Muriel is involved with two Samen Hier groups in The Hague, one with a couple from Yemen and the other with a man from Syria. With her knowledge of both Dutch and the Arabic languages and cultures she supports the groups in overcoming any potential cultural differences or language barriers. “It is mainly the Dutch directness and the Arabic politeness that clash. It is helpful to have a community builder in those instances. I try to listen carefully and to see with which intention things are said. I try to bring that together”.

The groups have spent four months together. Muriel will support them as community builder and will participate in the activities for a period of a year. She has seen the mutual exchange and contact develop. “In the beginning, it was exciting for everyone. You have heard the names before, but you have never met anyone and you have no idea what it will be like.” The first meeting of group ‘Lila Mura di Roma’ took place in the home of the couple from Yemen. “You directly notice the Arabic hospitality, because there was a lot of coffee, tea and cookies,” tells Muriel. “The first time I had to test the waters to see what the group members needed. “

Meanwhile, this has become a lot clearer and the group has undertaken a number of activities. They went bowling together, played jeu de boules in the park and had dinner on multiple occasions. “The group is matched well. Beforehand, we thought it would be of a more practical nature, such as proof-reading a CV or helping with schoolwork. But both the Dutch group members and the newcomers did not feel the need for this. They already have a job, so there was a greater need for social connection.”

“I hope that they become part of each other’s lives and stay in contact after a year, but especially that they have learned from each other.”

The bowling group excursion was a highlight. “The nicest thing was that the newcomers of the group brought another couple. We didn’t just do an activity with our group, but people from their own network joined.” This interplay is exactly what Muriel tried to achieve. “I hope that they become part of each other’s lives and stay in contact after a year, but especially that they learned from each other. ”I hope that the newcomers really felt welcome and that the (Dutch) group members made new friends, that they came into contact with a target group that they wouldn’t normally get to meet, and that they spread the word.”

Muriel is happy that she can be of use in her new city The Hague, despite, or maybe because of, living here for only a year. This exchange is also important to her personally. “It was a way for me to find connection and to feel at home. And I wanted to make a contribution to The Hague.” She would recommend everyone to get involved or to contribute to their surroundings in one way or another. “You contribute something meaningful and you can have an influence in the process. And I think that it is valuable to look at things from different perspectives, ultimately to pass a fairer judgment.”

She personally gained a lot from it and learned more about herself in the process. She hopes to share this with her surroundings and to inspire people to get involved. “I think that the connection is really important. We live in a time in which there is increasingly less connection, things take place online and people focus on themselves, but we do need this connection. I think that people are the happiest when they are connected with themselves and with each other.”

“I think that people are the happiest when they are connected with themselves and with each other.”

Do you want to contribute to safe havens? Support Samen Hier with your donation to Justice & Peace!

Muriel ten Brummelhuis contributes to our Samen Hier initiative as a community builder. Samen Hier is a nationwide movement of citizens and organisations that wants to change the way in which people on the run come to the Netherlands as well as the reception of refugees, through the implementation of community sponsorship. As a community builder, she supports two “welcome groups” in the Hague, one with a couple from Yemen and the other with a man from Syria. She has studied Arabic and has lived in Egypt and Morocco for an extended period of time. She now puts these qualities to use to bridge the gap between Dutch and Arabic languages and cultures.

Myrna, matching supply and demand between volunteers and refugees in Haarlem

Helping newcomers in your city

Myron Hamming, empowers youths to dream through the love for language

Francis, documenting police brutality away from the spotlight