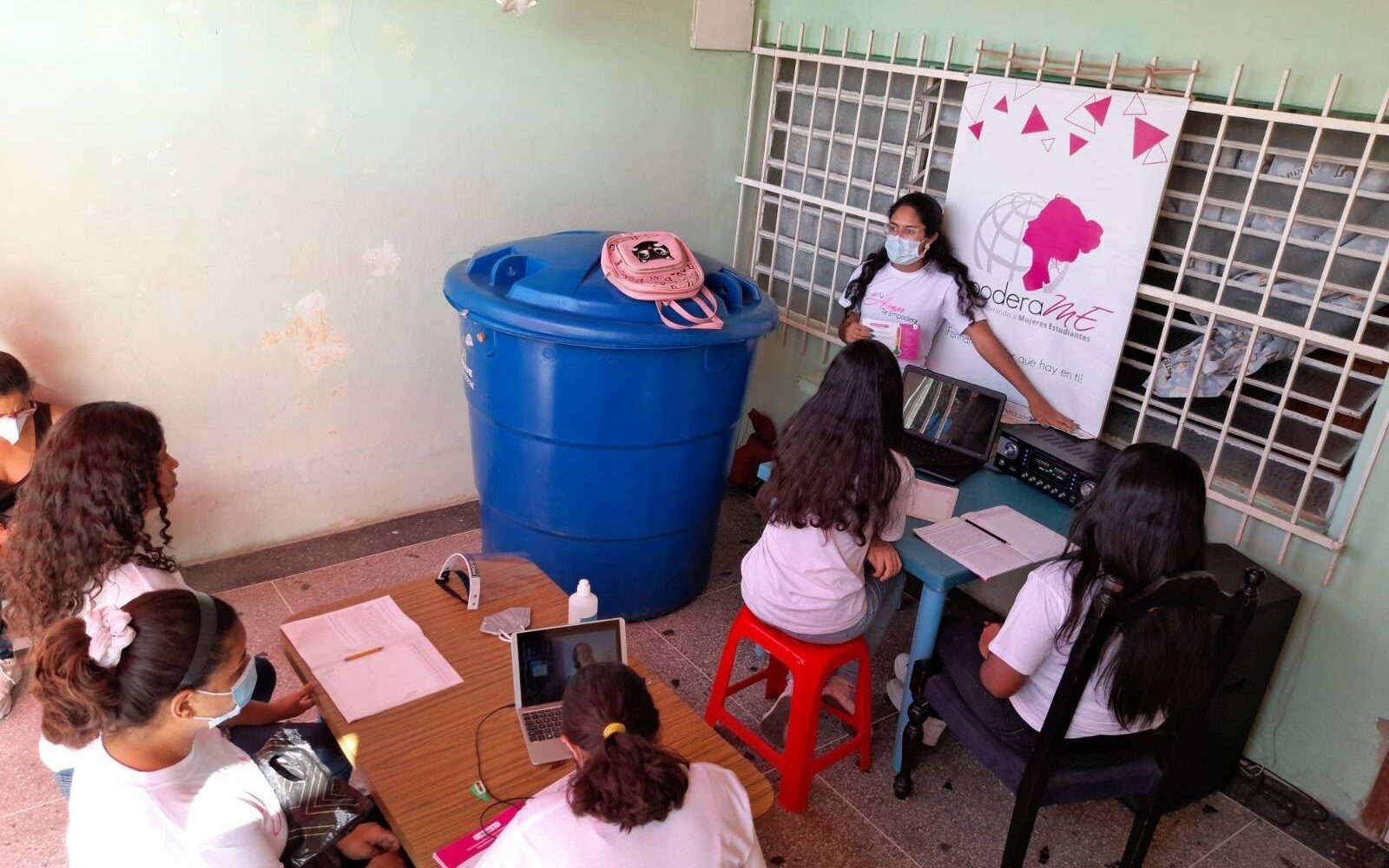 At 23 years of age, Carmen has already worked four years defending the rights of women and girls. In Venezuela today, women face poverty and violence, and lack access to health care and education service. But civil society organisations and activists who aim to improve people’s lives are branded as terrorists. In this article, Carmen explains why she decided to become a human rights defender despite the personal risk and hardship she faces.

At first, Carmen wanted to be a journalist. Her parents, both university professors, stimulated her to read the newspapers, to think critically, and to act on her principles. But in 2014, the streets of the nation’s capital, Caracas, exploded in civil unrest in reaction to the country’s high inflation, increasing violent crime, and chronic shortages of basic goods and services. As she witnessed the weakening of her country’s democratic institutions, Carmen changed her mind. At the age of fifteen, she decided to go into politics.

Few in her community supported her budding activism. Her friends saw the events as belonging to faraway Caracas: the demonstrations were dangerous and pointless and nothing to do with them. Carmen briefly wondered if perhaps they were right. And then she saw Malala Yousafzai’s Nobel Peace Prize acceptance speech.

‘I listened to the speech on the TV news. For me it was a break point because I thought, if she can do something, in a much more dangerous context than mine, why can’t I?’

At the age of seventeen, Carmen left home to study political science at the University of Carabobo. The following year, 2017, hundreds of thousands of Venezuelans protested daily the constitutional changes forced in by the government that severely crippled the voice of political opposition. 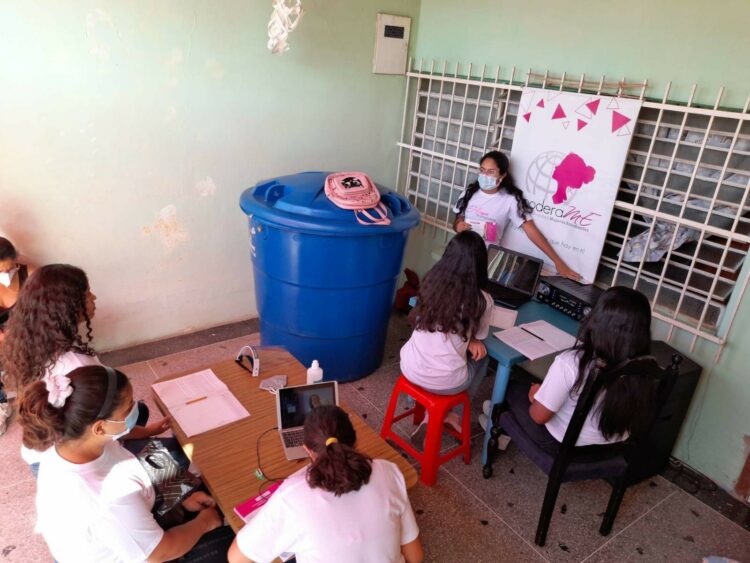 At university, Carmen took part in a project run by an NGO called EmpoderaMe (Empower Me). The non-governmental, non-profit organisation aims to train women, teenagers, and girls to become leaders of social change in their communities.

‘For young people like me, it’s very hard to see a future for ourselves in Venezuela.’ The UNHCR estimates that six million people have left the country, including the young and educated, civic leaders and defenders of human rights. For most of those who remain, daily life is a struggle for survival.

In Venezuela, the share of citizens living under conditions of extreme poverty surged to 79.3% in 2019, and the proportion of the workforce deemed skilled labor dropped to 42.3%, a consequence of the decaying education and training system, as well as the massive exodus of well-educated and skilled Venezuelans who have fled the country’s crisis.

Carmen volunteered for EmpoderaMe for two years, and then became a full-time employee after her graduation. She is currently Executive Project Assistant, running projects on both national and local levels. Her projects include informing adolescents on their reproductive rights and training them on how to protect themselves from gender-based violence, training women on their civil and political rights, and training leaders in vulnerable communities on how to document abuses of their rights.

So rather than as a journalist or a politician, it is as an activist and human rights defender that Carmen has found a way to contribute to improving her society. This path has put her on the last avenue open to dissent and opposition in the country. It isn’t an easy place to be.

‘NGOs, human rights defenders, and social or community leaders know the real problems people have. We try to show the reality because we have statistics and testimony of the people who suffer the terrible conditions in Venezuela. We are a big problem for the government and so now they try to silence us.’

In 2020, EmpoderaMe was labelled a terrorist organisation and an arrest warrant was issued for everyone working in the foundation. Since then, federal and state government institutions find increasingly creative ways to obstruct their work. For example, in working with teenagers, project leaders need the approval from the authorities to work in public schools. School administrators have had to cancel projects because of unofficial state government pressure. In early 2022, the federal government advanced new laws that will force NGOs to disclose their funding sources and name their beneficiaries, requirements that put donors and the communities they serve at risk.

Why is the government so determined to obstruct their work? ‘In our work, we disseminate and promote democratic values, document and denounce human rights violations and do humanitarian work.’ This work shows up flaws in the government’s implementation of its Bolivarian ideals that it would rather stay hidden.

The Bolivarian Revolution is a populist, left-wing movement founded by Venezuela’s previous President, Hugo Chavez (1999-2013) which aimed to build a system of popular democracy, economic independence, equitable distribution of revenues, and an end to political corruption.

In running projects in local communities, Carmen sees the dire conditions people face in Venezuela. The extent of people’s needs is what has kept her working non-stop, without holidays or breaks for nearly five years.

‘When the project is over, you never know if their situation is really changed. It’s very sad. And I try to help people, but when I return to my house, I also don’t have electricity, or water. And so, I need to resolve that problem. Or I don’t have internet so I can’t study. Or maybe I need to fix something in my house and I don’t have money for that.’

The stress of her work got so intense that Carmen nearly gave up her work. ‘I really felt exhausted and anxious about my life, about my situation, and also about my organisation because we had a problem with one of governors of our state. I asked myself what I was doing, and why I was doing it.’

In early 2022, Carmen spent two and half months in Shelter City, a temporary relocation programme dedicated to supporting human rights defenders from around the world. Her time in Shelter City Nijmegen was a welcome break during which she was able to take a step back from the daily stresses and learn about the importance of taking time out for self-care for one’s mental health. Thanks to her experience in the Netherlands, she returns to Venezuela with renewed energy, knowledge and skills to do her work more safely and effectively over the longer term.

Just before returning home, Carmen admitted that she worried about going back. Not out fear for her personal security, but because sometimes it is difficult to stay hopeful about Venezuela’s future.

‘…but, of course, I will continue my work. We have no choice. We have to continue to teach people and prepare new leaders. Because if not, well, who will defend our country and make life better for the people?’ 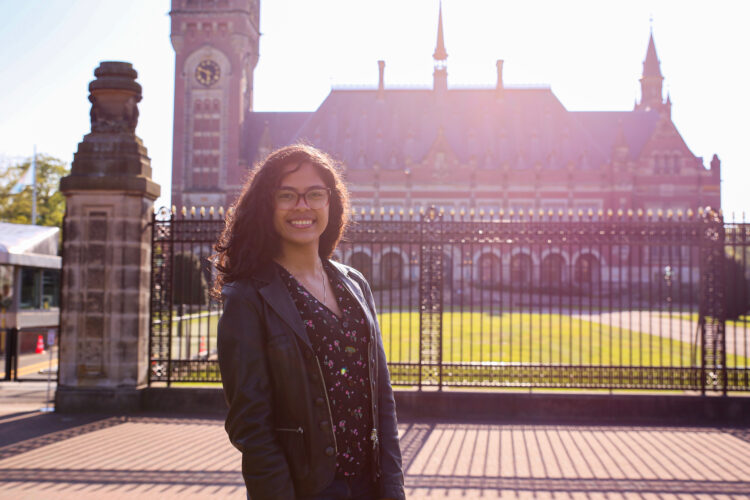 Do you want to support Carmen and other change makers? 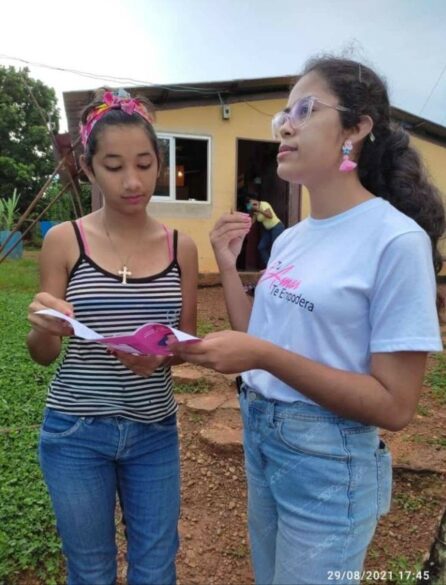 Carmen is a human rights defender from Venezuela, and Shelter City guest in 2021.

Nataliia, a journalist in service of human rights

Working towards a righteous society

Jhon, ‘You just cannot give up’

Mohamed, helping refugees overcome the obstacles he once faced as a newcomer

Read the stories of other change makers!