On Monday, 2 May 2022, President Adama Barrow of The Gambia attacked human rights defender Madi Jobarteh during the Eid (Koriteh) message on national television. In this message, President Barrow unjustly accused Madi of attempting to cause trouble in the country and blamed media platforms for providing a platform to Madi.

We at Justice & Peace Netherlands are alarmed by the President’s remarks to ‘handle’ Madi. We condemn these false accusations on national television and consider this a direct attack against Madi Jobarteh, against civil society and more specifically, the freedom of media and speech in The Gambia.

Madi Jobarteh is a human rights defender from The Gambia who has worked on various human rights issues over the last 20 years. He is one of the foremost voices in the country advocating for public sector transparency and accountability, and a strong democracy and good governance advocate who has taken a public stand on all issues of human rights across the country. He is also a peace advocate and dedicated to an inclusive and equal society by advocating for the rights of women and girls. He carries out this work peacefully, by working together with various civil society organisations in The Gambia, through campaigns, peaceful gatherings, and sharing information on online and press platforms.

Madi stayed in our initiative Shelter City for human rights defenders at risk in 2016 during a turbulent time in The Gambia. After 22 years marked by ever-increasing repression and a disregard for human rights in The Gambia under former President Yahya Jammeh, President Jammeh was voted out in an election in 2017 allowing Madi to return to The Gambia after one and a half years in the Netherlands.

“What I do is to uphold and defend the Constitution in order to ensure that the rights and freedoms of all Gambians remain protected and our needs get fulfilled by the State. That’s the only reason for my advocacy.” – Madi Jobarteh in his statement about the attack on 2 May, 2022

Governments have the responsibility to ensure the safety and protection of human rights defenders. This public message by a head of state is an attack on civil society in The Gambia, and on the freedom of speech and other fundamental freedoms and human rights. The remarks made are also tantamount to attempting to silence freedom of speech, and in particular citizens demanding justice and accountability. Furthermore, the message of President Barrow can have serious consequences, such as potentially inciting violence or harm against Madi Jobarteh and his family. As a result of this public attack, Madi has already received numerous death threats from unknown people online.

We stand together with our Shelter City partners in solidarity with Madi Jobarteh and his family, and support the actions taken by his community in his defense.

Want to find out how you can support Madi?

You can do so by: 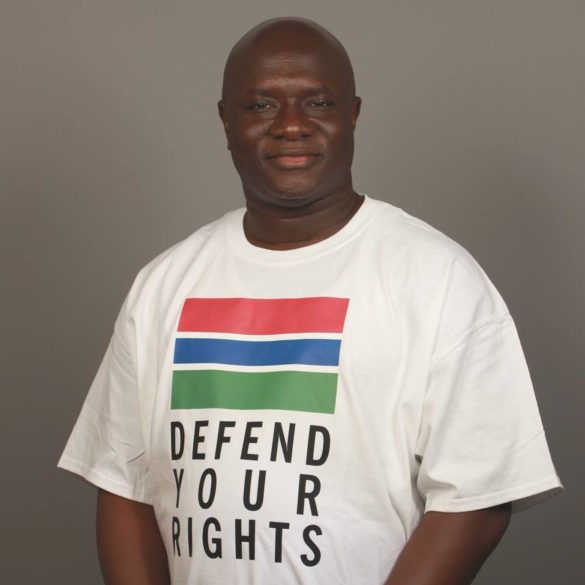