Madi, a voice for change in The Gambia

Gambian human rights defender Madi Jobarteh has spent his life working with others to grow democracy in The Gambia, where a new constitution is being written. In 2016, he participated in Shelter City for human rights defenders at risk during a turbulent time in The Gambia. After 22 years marked by ever-increasing repression and a disregard for human rights, former President Yahya Jammeh was voted out in an election in 2017 allowing Madi to return to The Gambia after one and a half years in the Netherlands. Madi speaks now more than ever about the work we all must do to ensure freedom for all.

COVID-19 impacts every individual differently. For Gambian human rights defender Madi Jobarteh, that means balancing time between helping individuals impacted by quarantine measures while simultaneously helping to prepare the country for the upcoming constitutional referendum. “I stay at home most of the time, but I also go out sometimes. I go to a lot of organisations doing food distribution to poor families…If I’m not out, I’m on Skype conferences a lot of the time. Meetings to discuss other issues because It’s not just about COVID-19. In The Gambia right now we are also in a transition to build a democratic society with a new constitution. That constitution has been drafted now, so we are also active to push so that we will have a new constitution by 2021.“

It has been a long road to this constitution, now in the proposal stage, and COVID-19 is just the latest hurdle on the path towards peace and justice in The Gambia. For Madi and other activists, this process is the culmination of a life-long dream to bring democracy to The Gambia. 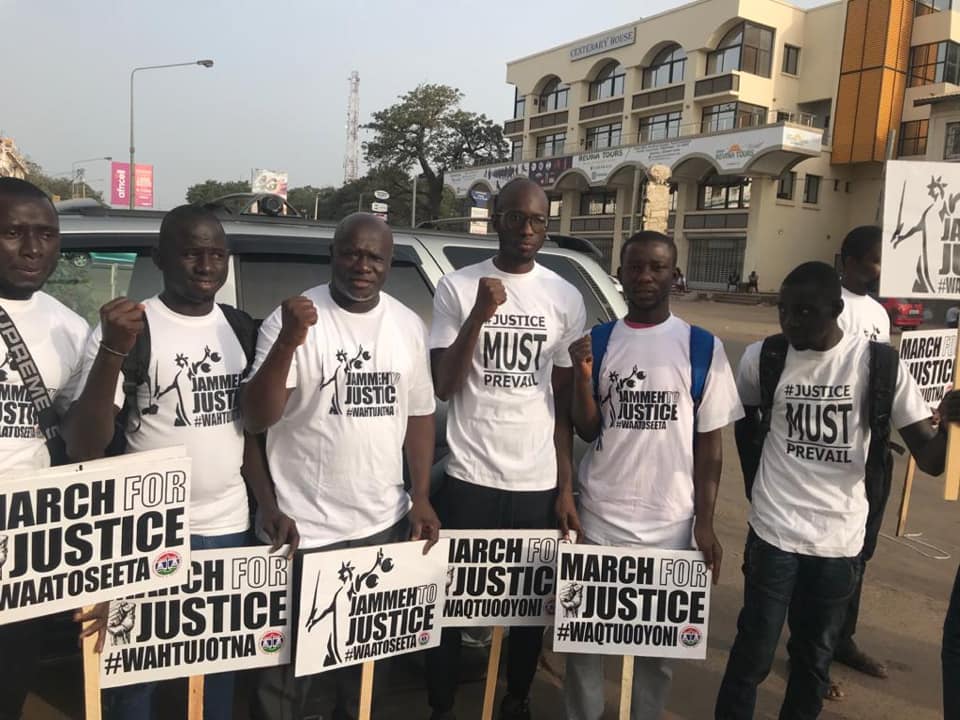 Madi together with fellow supporters joining the March for Justice on 25 January 2020, calling on The Gambian government to bring former President Yahya Jammeh to justice for human rights violations made during his regime between 1994-2017.

“I may not be able to say when was the first time (I spoke for change). Because I’ve been speaking to issues practically all my life. I’ll never be able to say specifically at what time or what issue.” From his early days working in media, to nearly a decade at The Association of Non-Governmental Organizations in The Gambia (TANGO), Madi has been a constant voice for human rights in The Gambia.

“In the course of my life, difficult as it is, I have spoken even in defence of gay rights, even though I received severe insults and condemnation from people. I’ve spoken in terms of religious freedom. Some even labeled me as a pagan. Which is a big thing in our society to be a called a non-believer. Here everyone is expected to believe in God.” 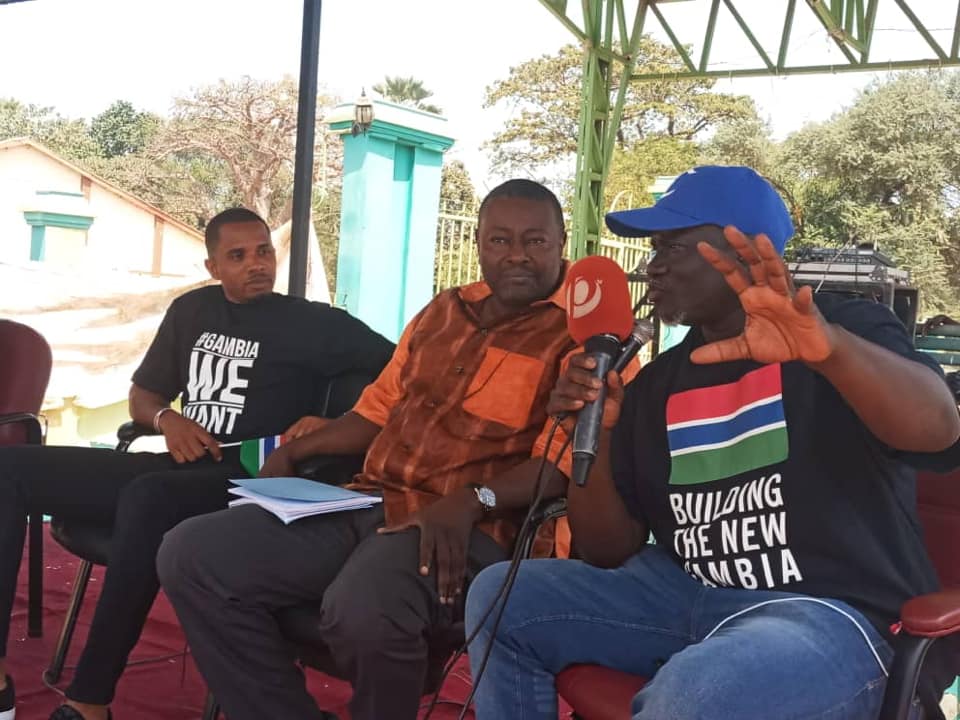 Madi speaking at a national public event focused on the present and future situation in The Gambia held on 18 February 2019, the day The Gambia became an independent country from the United Kingdom in 1965.

The Gambia is one of the smallest nations in the world, one-fourth the size of Netherlands, with a population of less than two million people, almost all of whom are practicing Muslims. For advocates like Madi, this presents a unique challenge.

Even after the regime change in 2017, which forced Madi to remain in Netherlands as part of Justice and Peace’s Shelter City programme much longer than originally intended, religion and culture are still issues Madi address on a daily basis in The Gambia. “Sometimes when you talk about democracy it is perceived as a Western idea, which sometimes becomes difficult for people to accept or entertain. When you speak about human rights in that context, you realise that people are not going to accept everything you say. Because their perception of human rights and democracy is always informed by their sociocultural beliefs and Islamic beliefs.”

Madi speaks full-time now about his beliefs in freedom of expression and other human rights. If he is not speaking as part of his work with the Westminster Foundation for Democracy, he is on social media, engaging with thousands of followers with a near-constant stream of posts and discussions. “Almost every day I receive personal messages from young people. Seeking advice, seeking my opinion about issues. Their personal issues. Their dreams. You know, what they want to do.” 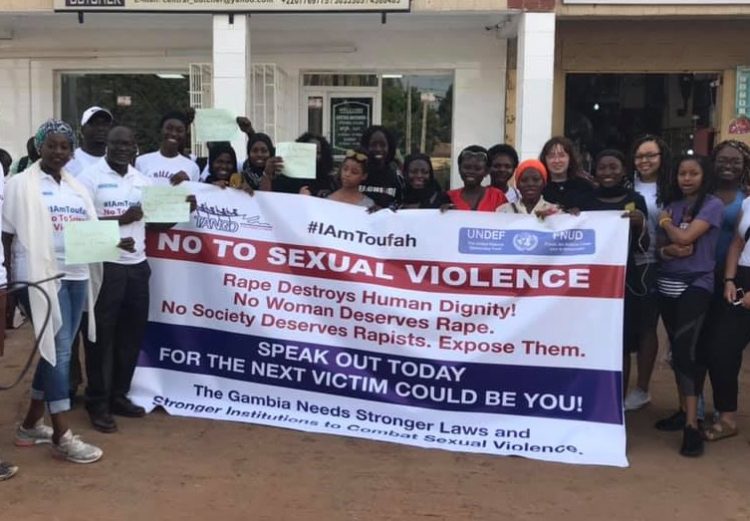 A march organised on 4 July 2019 against sexual violence in The Gambia. Madi has worked for over 20 years to progress the rights of women and girls in The Gambia.

The next generation of inspiration

Madi’s advice echoes that of previous generations of African leadership, Kwame Nkumrah and Nelson Mandela and a host of others. “When I came across them, they were fighting for freedom, for independence at that time. So they inspired me, particularly in a very serious way. So that’s why I have on my email a quote by Nkumrah, because that for me explains a lot of things about our society in Africa.”

“Anyone who stands for freedom, for human rights, I get inspired by that. And so that has been my source of inspiration, my source of strength in what I do. If Mandela could stand up to fight against apartheid, or Nkrumah could stand up against the colonialists. If you can have women, youth in Europe, all individuals to stand against oppression and exploitation. That’s what I find inspiring. So my entire time is spent reading those people, listening to them, and that keeps me going.” 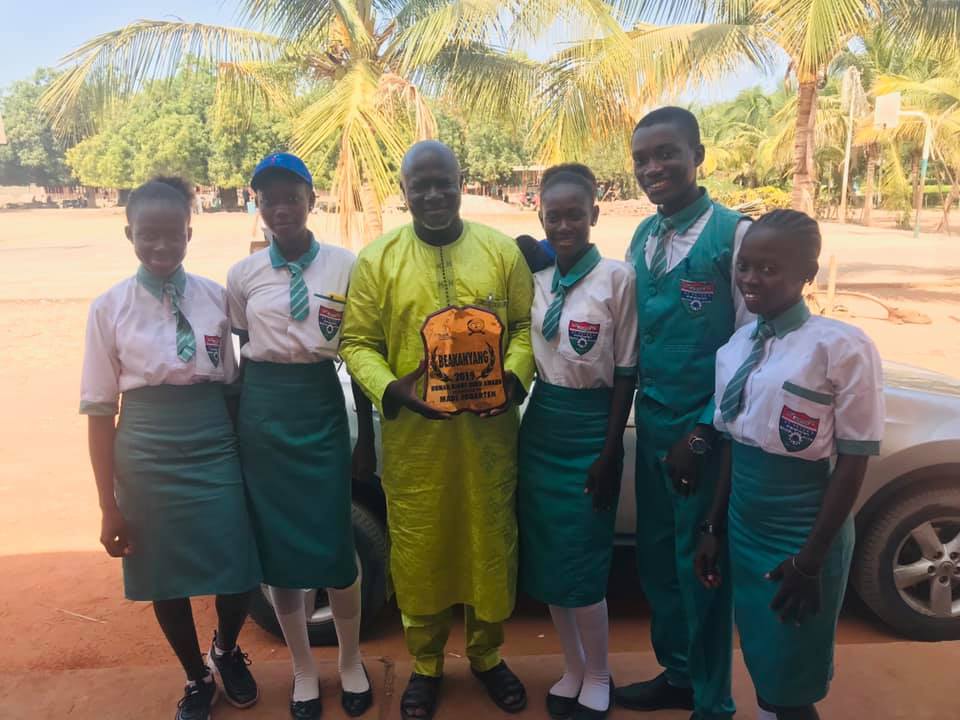 In 2019, Madi was awarded a human rights award for his work and dedication to upholding and protecting human rights by grassroots human rights organisation Beakanyang.

Madi has continued in the footsteps of these leaders in his work with youths across Africa, mentoring activists who want to start their own civil society organisations or helping to establish Pan-Africa clubs at schools across the nation. “I think I have to exemplify it by itself. Live those values and standards themselves in the way I promote human rights and democracy. In the way I relate to others individually, in the way I work with other organisations.”

For Madi, promoting human rights and democracy means promoting economic rights as well. “The higher the quality of your life, the more freedom you enjoy. The more services you enjoy, the more your freedom. If you have electricity, you can watch television and see what’s happening. You can have internet. You can have a fridge and store food, you don’t have to buy food every day. Life becomes cheaper because you put it in the fridge.”

These freedoms are never permanent. Human rights are under constant pressure from tyranny and corruption, a growing concern for Madi, especially as The Gambia and all of Africa engage more and more with the rest of the world. “This is my message to the young people of Europe: Be vigilant. Check what your leaders say. Stand against any sectarian, discriminatory, exclusionary statements, comments, and actions by your leaders and governments. At the same time look at the kind of relationship that your governments are building with the rest of the world because that relationship is creating a disadvantage for the people in those countries. This is something we have to address.” 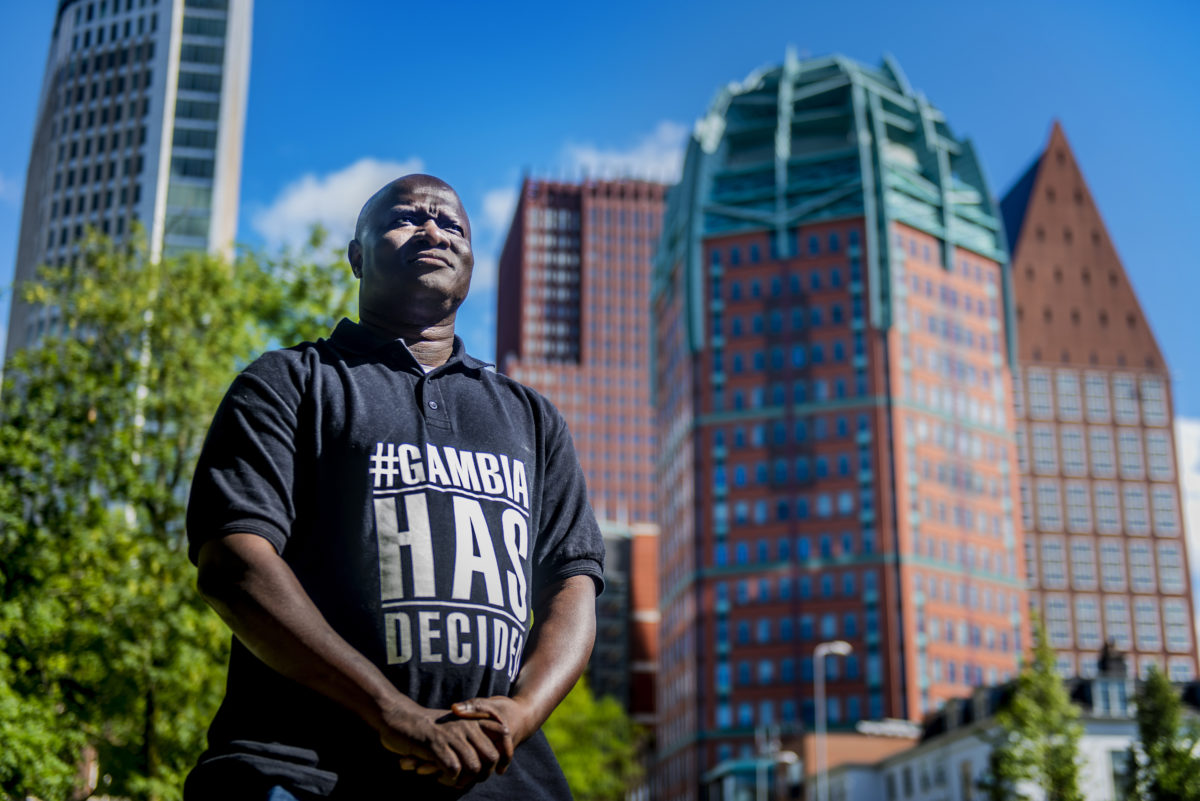 Photo of Madi during his stay in Shelter City in the Netherlands. Taken in The Hague. Photo by photographer Daniella van Bergen. 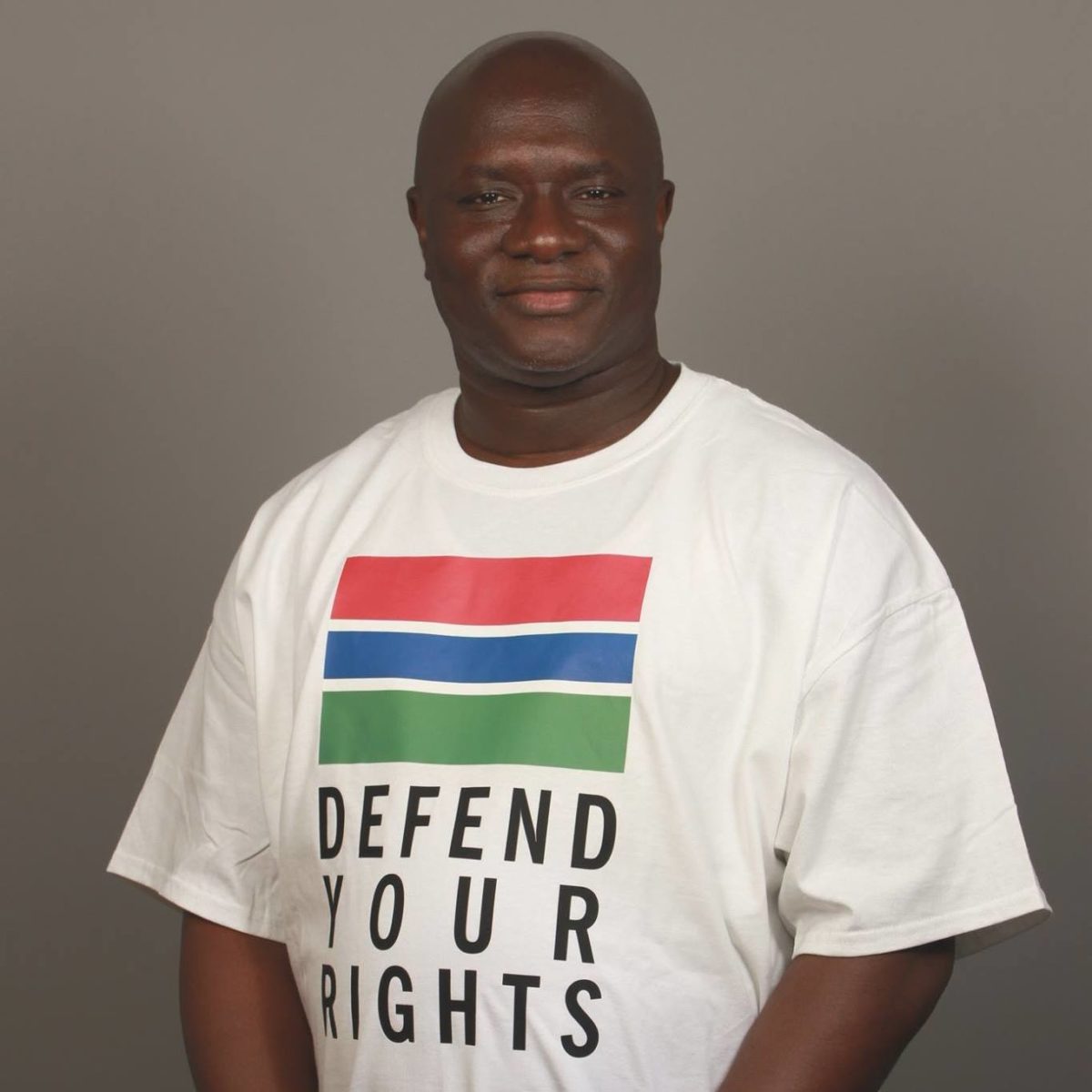