Photo above: Poster by Anne Wiesmann

On Valentine’s day Now You See Me Moria asked us to contribute to spreading awareness about the situation in Moria. ‘’Is there any love left for the people in Moria?’’

Now You See Me Moria is an initiative of three residents living in Moria Refugee Camp, and a Spanish photo editor living in the Netherlands. The 40-year-old Spanish saw pictures of a 23-year-old Afghan resident on Facebook, and was deeply impressed. The two got in contact and started the Instagram account Now You See Me Moria. Two other residents joined, and together they started an Instagram account to raise awareness and call on policy makers in Europe to demand a solution for the inhumane situation on Lesbos, Greece.

The group started the account in August last year, just before the fires in the former Moria Refugee Camp. With everyday pictures, they portrait what it is like to live in the camp. Snapshots with unidentified residents show us the lack of sanitary, the food, little children playing in the severe weather conditions, but also pictures of residents playing games, cooking food for each other or playing music together. It shows us resilience, even in the harsh conditions of the camp.

Photographers and journalists are not allowed inside the camp, and NGO-field workers are also not allowed to take pictures. Now You See Me Moria shows the human rights that are violated on a daily basis. On Valentine’s Day, they asked everyone to put up posters, made by designers from all around Europe with pictures of their Instagram account. They asked everyone to put up posters wherever we should think the message should be heard: outside our homes, in our neighborhoods, in our city centres. As Justice and Peace, we also joined the campaign. We asked our followers on Instagram to join and make the invisible visible. On Valentine’s Day, our team put up posters in Zeeland, Amsterdam, Limburg, Brabant and The Hague. Hundreds of peoples around Europe joined the campaign. The campaign was successful, but the work continues. It is still helpful to continue hanging posters and spread awareness for the organization! 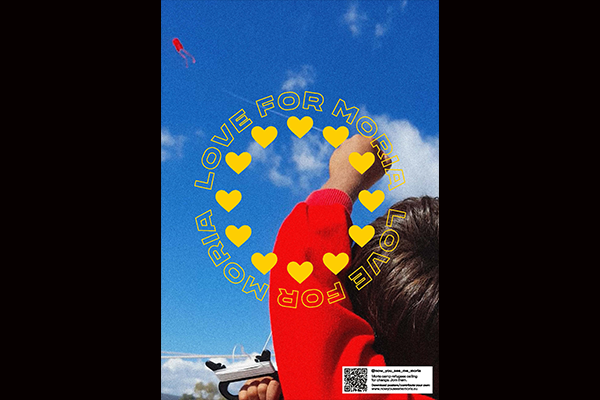 Through our initiative Samen Hier, we build welcoming communities for refugees. We want to find a way in which individuals do not have to face the challenges and serious risks on migration routes, and have to live in unhumane camps for months, if not years, simply because they are searching for a safer future. We strive towards invoking change and improving refugee rights.

Through Samen Hier, we are building a network of Dutch cities and villages where groups of residents can take the lead in the arrival and reception of refugees. With one percent of the world population currently displaced, too little attention is paid to the fact that refugees often don’t have the possibility to reach countries through legal and safe pathways. Communities of citizens and civil society organisations across the world have therefore come up with new ways to enable these much-needed pathways and to take the lead in the resettlement and welcoming of refugees, leading change in their communities or worldwide.

Do you like to read more about our initiative Samen Hier?