Sean, defining resilience as an LGBTI+ rights lawyer in Uganda

When Shibolo Awali Sean was eight years old, his father lost his job and could no longer feed the family. Sean left home for Mbale, the nearest city, and resold plastic bags in order to fend for himself and his younger siblings. His path from street child to lawyer and founder of an LGBTI+ rights defence NGO is an inspiring story of resilience in the face of overwhelming odds.

During his two years on the streets, Sean personally experienced the abuses of children’s rights.

‘There is this harassment by the law enforcement authorities, chasing children from the streets, not solving their problems, not knowing why they came to the streets, not finding solutions but simply coming around with canes…’

Sean not only managed to stay out of trouble, he also discovered ways to improve his situation. His earnest charisma earned him the trust of market women who entrusted him with their baked goods. He made a little bit more profit, learned English from people he met on the streets, and scouted for better opportunities.

It was this innate ability to network and make friends that led him to Child Restoration Outreach (CRO), a local NGO that supports street children in Mbale. After an aptitude test, he was put straight into a primary school. CRO enabled Sean to attend his entire primary and secondary education.

‘I wouldn’t really say that I am bright,’ says Sean when asked if his intelligence was the reason why he was able to get himself off the streets. ‘From a very young age I exhibited determination. I noticed that whichever person I spoke with that had time to share my ideas ended up liking what I said and offering help in some way.’ 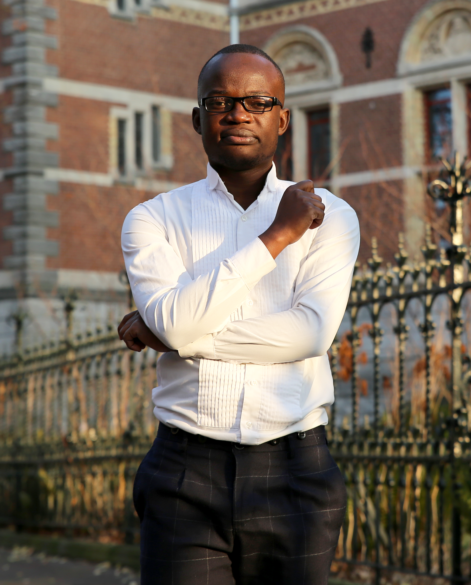 Sean is a lawyer and human rights defender for the LGBT community in Uganda. His work puts him on the front line of a highly contentious cause in which legal and physical risks are a daily reality. Sean spent three months in the Netherlands in Shelter City to regenerate the energy required for his work. 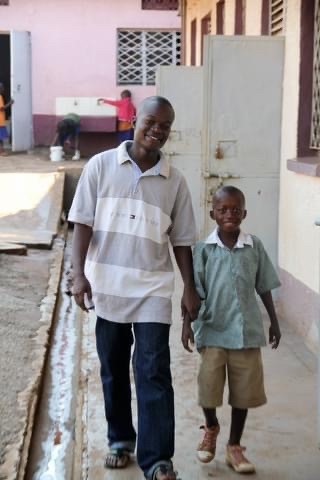 Sean helping out with other street children in a local organisation called Child Restoration Outreach (CRO), having just finished high school. CRO is a leading Christian National Organization assisting street children and their families in Uganda, originally established in Mbale.

Refusing to give up

By the time he was seventeen, Sean had decided to become a lawyer. But for that, he needed to go to university – a dream that was far beyond his means. And though the odds were not in his favour, Sean continued to knock on doors.

‘I was lucky,’ he says. An international NGO, the Child Restoration Outreach  Support Organisation, began providing a few scholarships for further education to former street kids in Uganda. Sean applied, and among stiff competition, was admitted. Was it luck? Or was his success a result of his refusal to give up?

‘In my application, I exhibited the ability to take on leadership and showed that I wanted to change my community. Of course, there is also good performance, but I am an individual who tries to turn challenges into opportunities, and I don’t look at the fact that I may not get what I want.’ 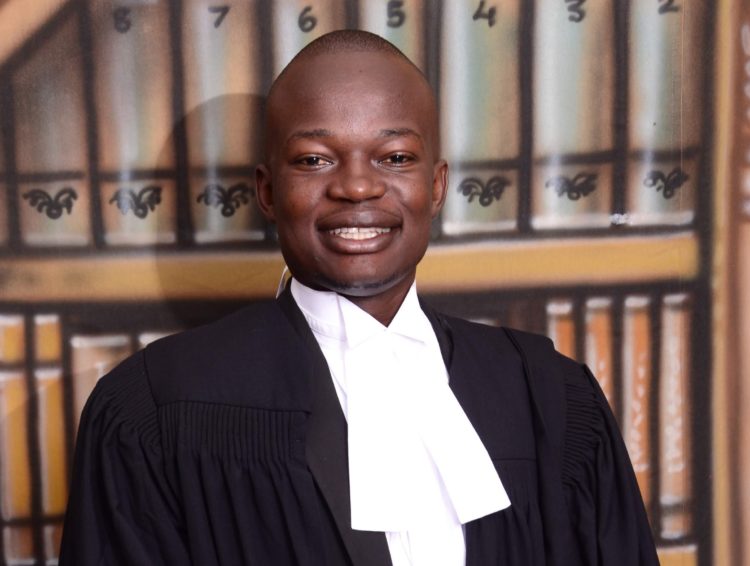 Sean at his Graduation from the Bar course of the Law Development Center (LDC) in Kampala. This is a mandatory Post Graduate Diploma Level for all advocates in Uganda. (June 2019)

It was in February 2014, during Sean’s law studies, that the Anti-Homosexuality Act was signed into law[1]. Though same-sex relations had been illegal in Uganda since colonial times, the ‘Kill the Gays bill’ as it became known internationally, both exacerbated existing homophobia and politicised the debate around it.

That’s when Sean decided to focus on LGBTI+ rights. Here were the same police forces who had chased children, now chasing members of the LGBTI+ community, their lawyers, even government appointed health personnel. Members of the community were routinely arrested on trumped up charges or blackmailed. Sean wanted to tackle this injustice.

Into the line of fire

With two friends, Sean established TRIUMPH Uganda (The Robust Initiative for Promoting Human Rights), a community-led, human rights defence NGO. This was a highly risky decision given that homosexuality was criminalised and anti-homosexual attitudes entrenched in the country.

‘The same stigma, the same discrimination that is projected onto the LGBTI+ community is projected onto rights defenders and lawyers. We are seen to be defending an abhorrent act of persons who are not human enough.’ 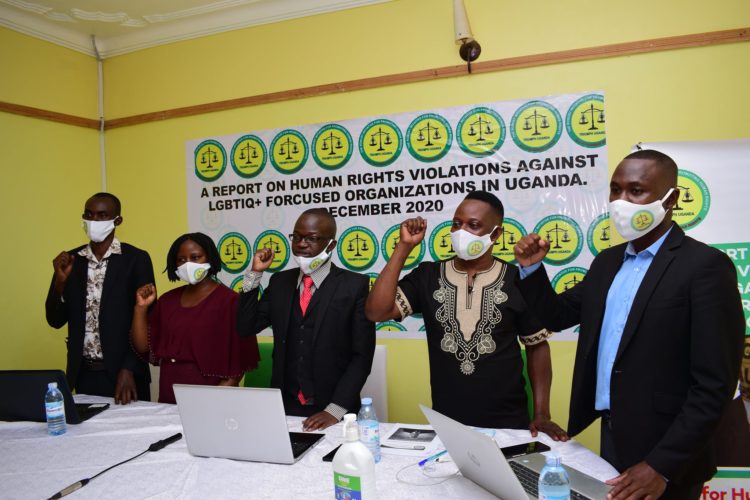 Sean and his team at TRIUMPH Uganda launching their 2020 Report on the ‘Human Rights Violations Against LGBTI+ Focused Organizations in Uganda’. They used the occasion to call for human rights lawyer Nicholas Opiyo to be freed following his arbitrary arrest. (December 2020)

The daily difficulties and security risks that he and his colleagues face is compounded by the fact that funding for their work comes exclusively from international donors. This creates a donor-led agenda rather than a community-defined, and one that is characterised by irregular funding streams. Furthermore, salaries and administrative costs (like security measures for their offices) are most often not funded, meaning that Sean does not draw a salary but relies on individual project stipend provisions.

Sean admits that sometimes the challenges seem overwhelming. ‘My own problem is that I love activism; I love my community; I work for my community, but how long will I be able to keep going?’

Sean defines his ability to continue his work despite the challenges as a refusal to contemplate defeat in the face of overwhelming odds.

‘My background has set standards for me: a standard of determination, a standard of consistence, and I don’t think about the idea that I may not succeed.’

‘I can stop only when there is a free and equal environment for everyone my country irrespective of sexual orientation and marginalisation.’

And Sean’s definition of success is nothing less than an overhaul of rights in his country. He acknowledges that he is appreciated by the many individuals he has been able to help so far, and that some may say of him that he has acted bravely. But, for him, those successes aren’t enough.

‘I can stop only when there is a free and equal environment for everyone my country irrespective of sexual orientation and marginalisation.’

‘The one thing I keep telling myself and those who find a bit of motivation from me, is that the last thing that you should lose is hope. For example, now, in Uganda, I can say that I’m an LGBTI+ rights defender. I couldn’t say that some years back. So, I believe there is hope, there is light at the end of the tunnel.’

Sean spent three months in Shelter City in the Netherlands with the main goal of regenerating, taking a break from the pressures of his work in Uganda. A major gain was the networking he was able to do, linking to others, seeing the issues he faces from different perspectives.

‘In the Netherlands, I’ve met people who are not referred to as LGBTI+ or gay. There are no gay teachers here: I see teachers. There is no lesbian doctor: I see doctors. It shows that there is indeed hope everywhere. What happens in this country could happen in mine. It may not happen in my lifetime. Maybe, it can, maybe not, but eventually it will be there.’ 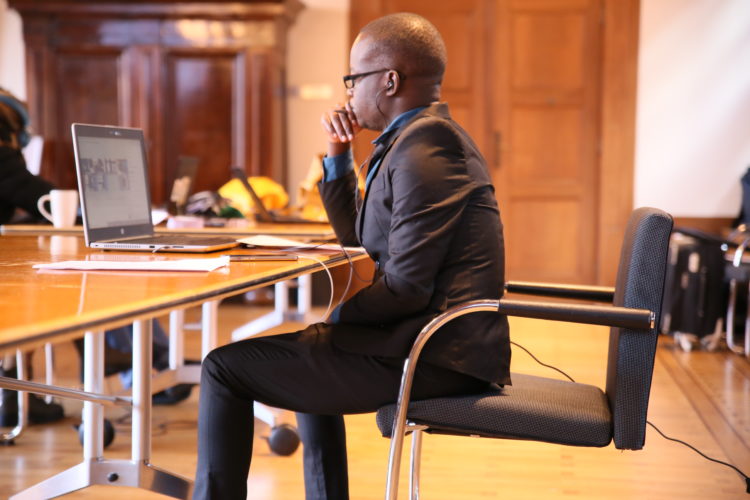 Sean at a virtual tour of the International Criminal Court (ICC), during a security trainings in The Hague, where the ICC is based. The training coordinated by Justice & Peace Netherlands is part of the Shelter City programme for human rights defenders. (November 2020)

[1] In August 2014 the Constitutional Court of Uganda ruled the law invalid on a technicality.

We hope Sean’s story inspires you to take action for positive change in your community. We thank Sean for allowing us to share his story, and for his contribution to a more just world. This story was made possible thanks to the kind support of the Nationale Postcode Loterij and its participants.