“All European citizens are under a violation of their rights—the rights to get real and clear information about the reality of the situation. […] There is not a [refugee] crisis. There is a humanitarian crisis, and there is a crisis of all our rights.”

Riccardo Gatti (@richigatu) faces pressure from European authorities on a daily basis as head of Open Arms, a non-governmental, non-profit organisation (NGOs) with the mission of rescuing refugees in the Mediterranean Sea.

His ability to save lives in peril depends on the cooperation of multiple actors: border authorities, coast guards, and the governments that determine whether the people on board Open Arms’  rescue ships can disembark onto European shores. The European political climate has become increasingly hostile to such missions; governments are criminalising the aid that NGOs try to deliver to people in need. Those involved have been inextricably required not only to save lives but also raise awareness of the reality on the ground and sea.

A new captain on board

Riccardo became involved with Open Arms in 2016, having crossed paths with the team while volunteering with Médecins Sans Frontières (MSF) in Greece. With a background in social work and a psychology degree, he was initially sharing tactical notes relevant to the situation facing the Greek islands: the regular arrival of overcrowded dinghies and boats of refugees crossing over from Turkey. Shortly thereafter, the group acquired a larger boat, the ASTRAL, enabling them to scale up operations in the significantly more perilous Mediterranean crossing between African and European shores. Originally Italian but living in the Spanish Palma de Mallorca, where he had begun looking into boat handling and licenses, he found himself in a position as an adviser. In 2017, he became the new captain on board. 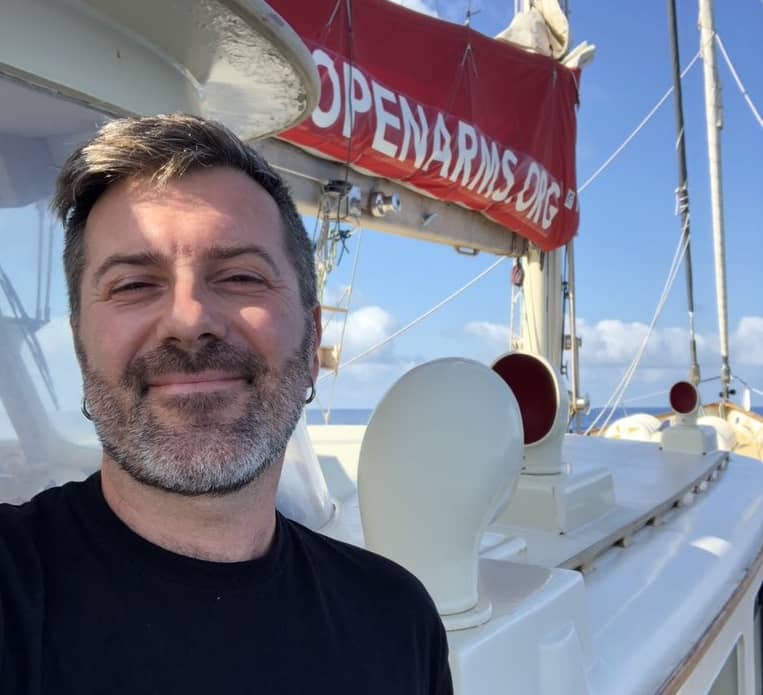 Riccardo has since become the head of mission, overseeing all parts of the rescue operation as well as mediating on the political front—which has become increasingly more contentious and challenging. Last year Open Arms opened a delegation in Rome which they plan to expand on under Riccardo’s leadership.

One man’s hero is another man’s criminal

“At the end of 2016 the situation was starting to change. We felt a dramatic change of the attitude and behaviour of the authorities against us. We started to understand that there was a power that didn’t want anyone to testify what was happening in the central Mediterranean.

[We saw] an effort from political parties and political individuals, policies—everything—to try to build this idea that the NGOs are unfair, [that we] are dealing with the smugglers and the mafia. This idea that got into the society. […] After that, there was an increase of attacks on NGOs: shooting, kidnapping, and closing the harbours to make it impossible to disembark.” 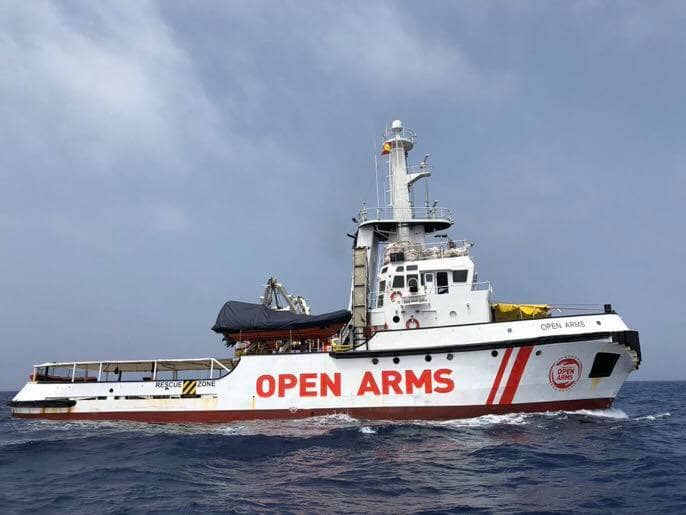 On March 19, 2018, Italian authorities seized the Open Arms boat under suspicion that it was assisting in illegal trafficking by picking up migrants in the Mediterranean rather than letting the Libyan Coast Guard find and turn back the boats. The move prompted outrage from groups including Human Rights Watch, who released a statement saying: “It is shocking that Europe has reached the point of criminalising rescue at sea.” After being impounded for almost a month by Italian authorities, it was released on 16 April. Captain Marc Reig and mission coordinator Anabel Montes remain under investigation.

Asked about the current status of those investigations, Riccardo clarifies:

“It is only open because they don’t want to declare they have no evidence against us…There is no formal accusation, just a lot of investigations and a lot of money spent by NGOs to try to demonstrate that we are totally clear.”

The external pressure on the organisation is compounded by an effort to sabotage rescue missions:

“We discovered that now the authorities that are obliged to spread messages—via satellite, et cetera—are not doing it. We discovered that the message they are spreading was totally untrustworthy, because they would announce several hours after the rescue operation, and nobody could understand if it was real or not, giving mixed positions and making it unclear.”

Without clear collaboration between the parties responsible for tracking and responding to distress calls and boat sightings, Open Arms is essentially blinded at sea.

The obstacles that compromise their ability to fulfill their mission of rescue start even before the boat leaves the dock, but even more await when they return to land. Open Arms, as well as other rescue boats on the Mediterranean, has in recent months been refused permission to disembark at Italian docks. In July, it was forced to dock in Barcelona after being refused by Italy and Malta. It returned from its latest mission on 21 October, docking in Valencia after accusing the Libyan coast guard of abandonment and Italy of shutting its docks. As Riccardo describes it:

“The real situation is that the authorities in power are using any means, legal or illegal, to find a way to ban all NGO boats from the central Mediterranean, because we are witnesses. We are denouncing what the Libyan coast guard are doing, what the ships are doing that are pushing back people despite being signatories of the Geneva Convention. It’s totally illegal.”

Open Arms began as a small volunteer mission with just a handful of people from Barcelona who decided to take action and travel out to the Greek island of Lesvos with limited equipment and funding.

The Open Arms story is a civil society success story, in that a small volunteer response was able to grow into a full-fledged, fully-equipped rescue crew thanks to the donations and support of other individuals. In June 2016, they were able to charter the ASTRAL and save 15,000 lives on the Mediterranean in the first 4 months of the ASTRAL’s rescue mission.

In its three years of operation, thanks to the support of over 75,000 donors, the Open Arms ship has rescued 59,400 lives in the Mediterranean. As Riccardo puts it:

“The real scenario of why [Open Arms] grew was really because of an answer of civil society… I think it was [a case of] clear contact between the feeling and the desire to do something, from the people, to have the possibility to reach [out] by hand.”

Today, their mission continues to depend on civil society’s support. When their ship was impounded by Italian authorities, a petition on the social activism platform Change.org calling for release of the boat received over 375,000 signatures. The funds they require to continue their work are collected via a donation page on their website.

Before they head back out to sea, the team has a lot of moving pieces to put in place. Among these is securing an agreement—even if only an informal agreement between captains—with another boat to sail alongside them. If they can no longer count on the support of the other actors at sea, they will need a bigger back-up boat with which to rescue people if needed.

When not on rescue missions, Open Arms will be spreading awareness about the situation and their work in Spanish society, visiting schools and holding public talks. They have also recently embarked on a new mission called ‘Misión Origen’, working in migrants’ home countries to highlight the dangers of the crossing. The aim is to diminish the number of people who embark on the journey and thereby reduce the number of lives put in peril.

The pressure is unceasing, and the work never-ending. But Riccardo shares:

“I feel good. I’m always tired, but I feel happy to do this because, hopefully, there will be one day that all of us will quit this job because there is no need for us to be here.”

Fortunately, public support and recognition of their work continues to grow; Open Arms is a nominee for this year’s European Parliament Sakharov Prize for Freedom of Thought, traditionally awarded to defenders of human rights and fundamental freedoms.

Exemplifying freedom of thought, Riccardo has a piece of advice for European citizens:

Open Arms is, alongside Justice & Peace Netherlands, a signatory to the European Citizens’ Initiative ‘We are a Welcoming Europe’, a petition calling on the European Commission to provide safety to refugees seeking a new life, stop governments that punish volunteers and civil society organisations for offering humanitarian help for refugees, and guarantee the protection of rights against human rights abuses at our borders. Sign the petition here.

In the face of efforts to keep Open Arms’ hands tied, Riccardo affirms their intent is to bear witness to the situation and to always provide help when help is needed. A video commemorating Open Arms’ third anniversary puts the situation compellingly and succinctly:

“When someone is drowning at sea, there is only one possible decision: you save a life or you silence a death.”