Shelter City has transitioned into the new year with an important announcement. Starting this year, Shelter City The Hague coordinated by Justice and Peace Netherlands will be providing two extra places to journalists at risk, with a focus on women journalists.

For the next five years, Shelter City The Hague will provide more safe spaces to journalists coming from countries where freedom of expression and press freedom are restricted. This has become needed in a context of shrinking civil space and deterioration of the situation of journalists worldwide, especially women journalists. These additional places in Shelter City have been made possible with the kind support of the Dutch Ministry of Foreign Affairs, which aims to support freedom of expression globally and to end impunity for violations committed against journalists.

“No journalist should have to fear intimidation, violence or persecution. Journalists should just be able to do their job. They are the oxygen of a free, inclusive and diverse society.”- Stef Blok, Minister of Foreign Affairs of The Netherlands

The Dutch Minister of Foreign Affairs, Stef Blok announced the additional support to Shelter City and journalists at risk during the World Press Freedom Conference in December 2020. This support comes at a vital time when journalists around the world are facing increased risks. As stated by the UN High Commissioner for Human Rights, Michelle Bachelet: “We need to act urgently to protect those who protect us, by courageously exposing corruption, confronting violence and abuse, and providing vital information for each of us.”

The additional support will give special attention to women journalists due to the gender-specific threats and challenges they face for being women and journalists. According to a report published last year by the UN Special Rapporteur on violence against women, “women journalists are disproportionately targeted by gender-based violence and sexual harassment, both within the work place and online”. For this reason, taking a gender perspective in fostering the safety and protection of female journalists is essential for Shelter City.

During their three-month stay in The Hague, the journalists will be able to take rest in a safe space, allowing them the opportunity to re-energise and re-strategise, while also taking care of their physical and mental health. The journalists will also receive holistic and tailor-made security training that will contribute to  ensuring they can continue their important work safely and effectively once they return to their countries of origin. Next to this, the journalists will be able to network and build connections with local allies and a range of expert organisations in the Netherlands and abroad, which have extensive experience working with journalists and media organisations from around the world. 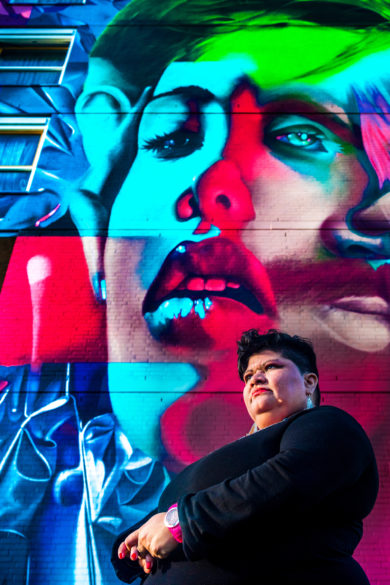 Tomy is a Honduran journalist and human rights defender, who was hosted in Shelter City The Hague in 2016. Through her journalism, Tomy denounces human rights violations in Honduras and engages in the defense of women’s rights, freedom of speech and indigenous rights. The photo of Tomy was taken by photographer Daniella van Bergen in front of a graffiti mural in The Hague, created by Karski & Beyond.