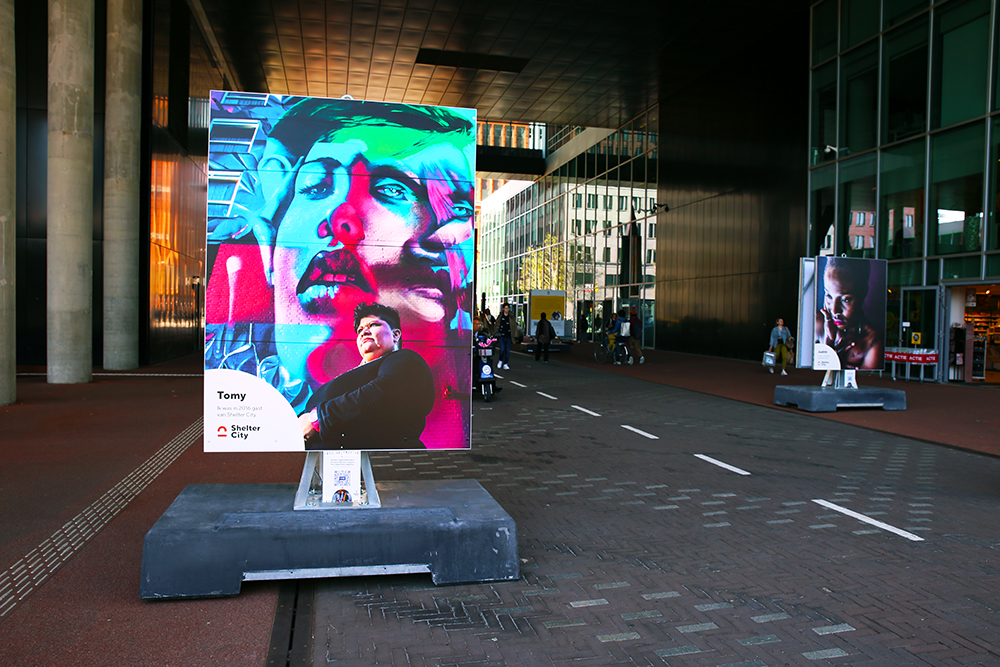 Where: Turfmarkt, next to The Hague Central Station
When: April 20 to May 20

Ten years ago, Justice & Peace founded the first Shelter City to offer human rights defenders at risk a temporary and inspiring safe haven. In those 10 years it has grown into a global movement of 21 cities and more than 400 human rights defenders were supported. To celebrate this anniversary there is a large open-air exhibition from April 20 to May 20 in The Hague right as you walk out of The Hague Central Station. The exhibition consists of six powerful portraits, made by Daniella van Bergen, of international human rights defenders that stayed in one of the thirteen Shelter Cities in the Netherlands because they face threats due to their work.

By placing the two-meter high portraits at a central place, we hope to make citizens and visitors of The Hague more aware of the necessary but also dangerous work of human rights defenders and activists. We therefore invite everyone to come see the portraits and read the stories of these exceptional people.

Photographer Daniella van Bergen made the powerful portraits of six Shelter City Netherlands guests. Before making the portraits, she spend a lot of one-on-one time with each human rights defender to get to know their struggle and strength. “I listened to their stories. Then their mask came off.” This personal attention makes the portraits even more impressive.

Each portrait has an accompanying story of the human rights defender. For example, the story of journalist and activist Tomy, who fights for for women’s rights, freedom of speech and land rights for Indigenous Peoples. Journalism is dangerous work in Honduras. Tomy: ‘Being a human rights defender is extremely satisfying. But first, you should take into serious consideration such a decision.’ She re-energized in Shelter City The Hague. During her stay she could mentally recover and strengthen her digital and physical safety capacities.

Currently, there are twelve international human rights defenders in the Netherlands that tackle topics such as women’s rights, LGBTIQ+ rights and the environment.

Shelter City is a global movement that offers safe and inspiring spaces to human rights defenders at risk. Here they can re-energize, receive tailormade support and engage with allies in order to reinforce their local actions for change. Each Shelter City consists of a local network of organizations and citizensOver Shelter City.