On the 10th of December, the International Day of Human Rights, two Sudanese refugees arrived in Rotterdam directly from their host country Egypt. On this Human Rights Day, the two refugees were welcomed by Rotterdammers who want to fight for their human rights and for a good start of their new future in Rotterdam.

These Rotterdam citizens are part of Samen Hier Rotterdam, an initiative in which groups (of friends) are committed to welcoming refugees. Rotterdam has been receiving resettled refugees for years, but is the first Dutch city that uses this so-called community sponsorship model, together with its citizens, to receive resettled refugees. Resettled refugees are refugees who are not safe in a non-European host country, but are not able to return to their country of origin either. The two Sudanese that will arrive this week, count towards the Rotterdam municipality’s quota.

“We have to stop ourselves from handling too much for them”

Bart is a Rotterdam citizen in heart and soul and, together with four friends, he has been matched to one of the two Sudanese. He didn’t have to think twice about participating after reading a flyer of Samen Hier: Because of the news and the media, one is aware of the suffering refugees go through and we think we should be there for one another. This guy comes from the hell of Sudan, after which he lived in a slightly less hellish situation in Egypt, but life for him there was not pleasant at all. This motivates us to create a safe and nice environment in Rotterdam for him. We have already bought him groceries, so he has everything he needs when he arrives in Rotterdam; the form to request his public transport card is ready; and we have been asking acquaintances if they would like to donate furniture. We have to somewhat stop ourselves from organising too much for him, because we want him to have a say in which furniture he likes to have in his house, for example. We are greatly motivated to ensure he finds his place in the Netherlands.”

To realise the resettlement of refugees together with Rotterdam citizens, Platform Rotterdam Verwelkomt Vluchtelingen, the Rotterdam Municipality, VluchtelingenWerk Rotterdam, and COA work together intensively. In doing so, they follow the Samen Hier community sponsorship model of human rights organisation Justice and Peace. Robin Muzea, team leader of VluchtelingenWerk Rotterdam: “Most refugees are accommodated in the area, often the poorest countries in the world. Sometimes they stay there for years in a most dead-end situation: returning to their home country is impossible and they can’t establish a new life in the country they’re staying in either. Resettlement to another country is often the last resort for these refugees.’’ Program coordinator Maaike Graaff of Justice and Peace adds: “Through the effort of citizens like Bart we can make sure that refugees, after careful selection, can come to the Netherlands safely and can become fellow citizens from day one.”

The municipality of Rotterdam is the first municipality in the Netherlands that uses community sponsorship for the accommodation of resettled refugees. This does not concern financial sponsoring, but means that citizens share their time, knowledge, and network with resettled refugees. Juan Heinsohn, coordinator at Platform Rotterdam Verwelkomt Vluchtelingen, fled from Chile in 1978 and arrived in the Netherlands through resettlement. At the time he experienced the importance of having access to a Dutch community: ‘’Contact with the people here creates trust. Your help gives hope. That is how it went with my family.’’  Ineke Palm, also coordinator at Platform Rotterdam Verwelkomt Vluchtelingen, says: “As Rotterdam Verwelkomt Vluchtelingen we gladly participate in this. If the municipality realises that Rotterdammers are willing to accompany newcomers, they will be more willing to receive people from the resettlement programme. And if this happens in many more cities, we might be able to double the amount of resettlers the Netherlands accommodates. That is badly needed, considering the miserable and inhumane situation in which many refugees find themselves.” 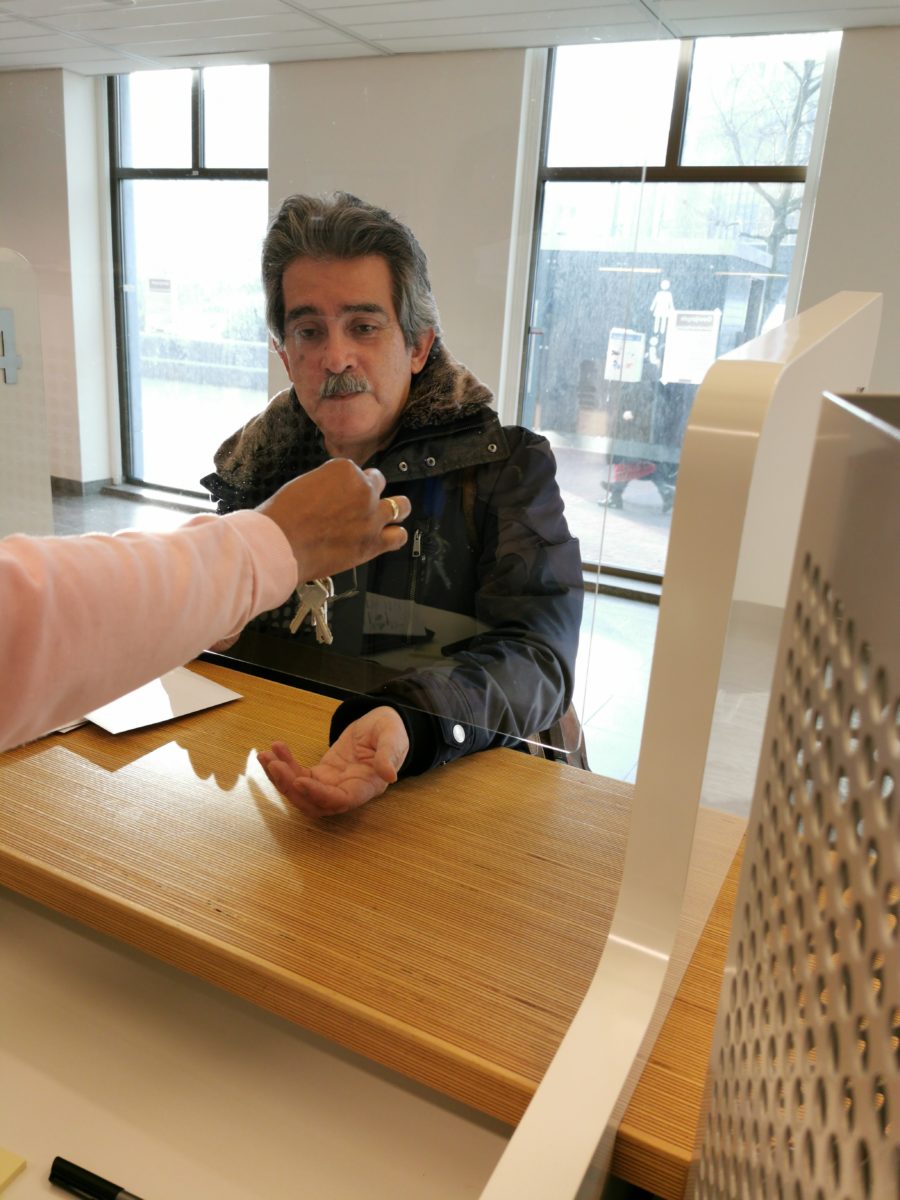 Juan Heinsohn, coordinator at Platform Rotterdam Verwelkomt Vluchtelingen, receives the keys of the temporary homes where the two resettled refugees are welcomed by the Welcome Groups.

Resettlement is a careful selection by governments in which they receive the most vulnerable refugees, when these refugees are not able to return to their home country and can not stay in their host country either. The UN refugee organisation UNHCR identifies the most vulnerable refugees for resettlement. The Netherlands has a national target for refugees in which it has established a quota of 3000 refugees that may come to the Netherlands through resettlement, via the resettlement route. This means that the Netherlands invites around 500 refugees to settle in the Netherlands. Less than 1% of all refugees (79.5 million last year) is being resettled. This is due to the limited number of countries that support resettlement and the limited places that are offered. Therefore, it can take years before someone who is selected by UNHCR is taken to safety.

Would you like to know more about the possibilities to take part in Samen Hier? Go to www.samenhier.nl
SHARE