“It is not normal that people have to sleep on chairs”

Photo on top: Campaigners in front of the entrance of the ministry of Justice and Security

In Ter Apel, the only application centre for asylum seekers in the Netherlands, there are too little beds. In the past weeks, hundreds of people had to sleep on chairs, and the Red Cross set up tents because all the chairs were also occupied.

On June 14th, dozens of citizens therefore started a folding chair protest in front of the entrance of the ministry of Justice and Security in The Hague. A large number spent the night there. With their protest, the activists showed that the crisis in Ter Apel is the result of cabinet policy. This action was organised by DeGoedeZaak; Justice & Peace participated with its initiative Samen Hier to stand in solidarity with the refugees in Ter Apel and to plead for a humane migration policy. 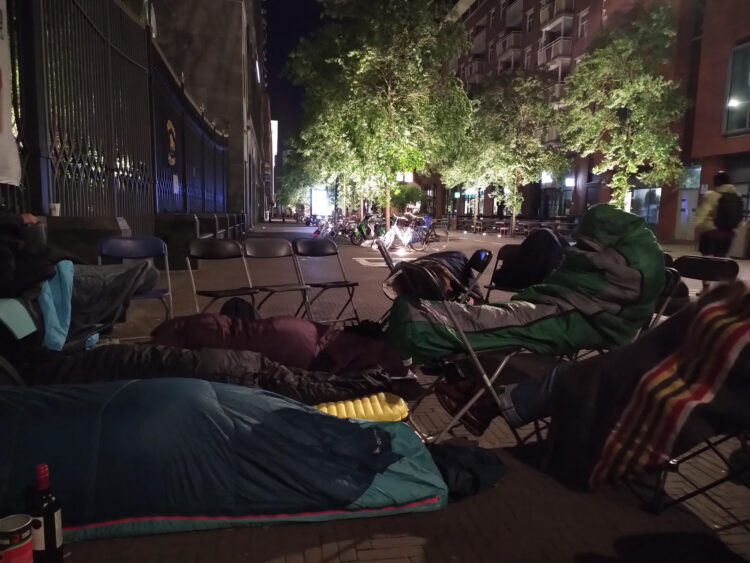 Activists sleep outside on folding chairs

“The crisis in Ter Apel is a new low. We stand in solidarity with the people there and are fighting for a solution. That’s why we are taking action and spending the night here, so people can’t look away.”
(Jesse Oberdorf, DeGoedeZaak)

For a human migration policy, starting with a second application centre

The only application centre in the Netherlands is located in a remote corner of Groningen, in a place without a train station. We plead for an emergency solution for the night, a second central application centre, and a sustainable and humane refugee policy.

In the afternoon Liselot van Zantvoort, Programme coordinator Migration & Human Rights at Justice & Peace, spoke on stage on behalf of the large group of people who came to the Netherlands as refugees and joined Samen Hier:

Liselot also spoke on behalf of the large group of Dutch people, including the Samen Hier community, who actively (want to) work to welcome people forced to flee:

“The unwillingness of politicians to organize humane and sustainable reception is in stark contrast to the involvement of Dutch people who stand in solidarity. The host families, language buddies, Samen Hier groups and volunteers prove time and time again that there is sufficient support in the Netherlands for humane policy.” 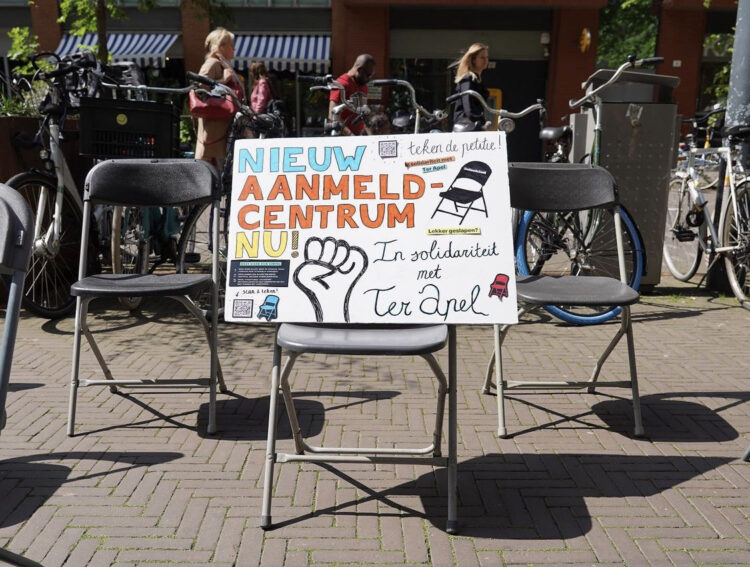 Eric van der Burg, State Secretary of Justice and Security, came by in the afternoon to listen to the activists and join the conversation. He acknowledged the problems and said he was working on a solution, including placing more responsibility at the municipalities.

Do you also believe that everyone has the right to a safe haven?

In June 2022, Justice & Peace published the Samen Hier impact report which showed that community sponsorship is a concrete and successful way for municipalities and citizens to welcome resettled refugees together. Read the full report here to learn about these experiences.

Samen Hier, one of the initiatives of Justice & Peace, is a growing national movement of citizens and organisations that want to reshape the way people forced to flee come to the Netherlands and the way we receive refugees. Through community sponsorship small groups of citizens can commit themselves in a concrete way to safe havens and safe routes for people on the run.