With much sadness, we announce the passing of human rights defender, journalist and former Shelter City Costa Rica and Utrecht guest, Ileana Lacayo. Ileana died in the early morning of the 29th April in a hospital in Bluefields, Nicaragua, as a consequence of an infection with COVID-19.

Justice & Peace and our Shelter City partners extend our heartfelt condolences to Ileana’s family, friends, and colleagues, and to the people of Nicaragua in these difficult moments. We from Shelter City got to know Ileana as a determined, courageous woman, with whom we shared many laughs. She was generous, kind and a great storyteller, and became a dear friend to us all. We will always remember her commitment to human rights, freedom of speech, her kindness, and her joy.

Since 2007, Ileana faced multiple threats due to her work and publications as a journalist in national media. Matters worsened in April 2018, when she and her colleagues participated in a march which ended in a police attack that killed Ileana’s colleague and friend Àngel Gahona. Ileana communicated the tragedy in various ways through national and international media and was the first to identify the police as the prime suspect in the journalist’s murder. After this courageous act, Ileana received numerous threats from Daniel Ortega’s government. The persecution and criminalisation by the government forced her into temporary exile away from Nicaragua.

Ileana first found a safe space in Costa Rica, where she could take a break in Shelter City Costa Rica with the support of Fundación Acceso. There she was able to rest, re-energise, and receive tailormade support. Following her participation in the programme in Costa Rica, we were honoured to receive her in Shelter City Utrecht in the Netherlands, where she took English classes, expanded her network, spread awareness about the situation in Nicaragua, while making many friends and local allies. Together with the her host organisation in Utrecht, Peace Brigades International the Netherlands, Ileana organised a public event to draw attention to the socio-political crisis and repressions of free press in Nicaragua, and shared her story courageously with the local audience.

After Ileana’s time in Shelter City in the Netherlands, she went back for some time to Costa Rica, before being able to return to Nicaragua to continue her work and be with her daughter and granddaughter. When she returned to Nicaragua, she kept on denouncing the constant attacks and intimidations she received from the Ortega regime. Ileana remained one of the voices who constantly demanded the investigation of the death of her colleague Ángel Gahona until her untimely death.

On Friday, 30th April Ileana was buried in the San Juan de Dios cemetery in the city of Bluefields. Her friends, family and colleagues accompanied her coffin that was covered by the Nicaraguan flag, flowers and photos.

Ileana was a 47-year old freelance journalist from Nicaragua who published for various media outlets. She was from the Caribbean coast of Nicaragua and was always enthusiastic to tell people about the beauty of this side of Nicaragua. Apart from being an accomplished journalist, for the last twenty years she volunteered for various initiatives and organisations to defend the rights of women, children, indigenous peoples and afro-descendants. She belongs to a group of independent journalists who promote social mobilisation, advocacy and campaigns in defense of freedom of expression, respect for women’s rights, nonviolence, territorial laws of indigenous peoples including afro-descendants.

To see the short documentary that was made about Ileana during her stay in Utrecht, click here or watch below:

This tribute was written with the contribution of our partners in Shelter City Utrecht and Shelter City Costa Rica. Justice & Peace and our Shelter City partners extend our heartfelt condolences to Ileana’s family, friends, and colleagues, and to the people of Nicaragua in these difficult moments. 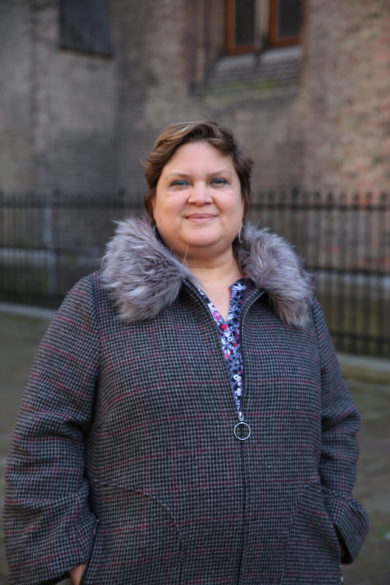 Ileana was a 47-year old freelance journalist from Nicaragua who published for various media outlets. She belongs to a group of independent journalists who promote social mobilisation, advocacy and campaigns in defense of freedom of expression, respect for women’s rights, nonviolence, territorial laws of indigenous peoples including afro-descendants.