Samen Hier Rotterdam: how Sanne and her daughter Saar became friends with the family of Anis and Houda from Syria.

As a remedial educationalist, Rotterdam-based Sanne Vink works with children and adolescents in need of treatment and a listening ear. Her relationship with the children of Anis and Houda Abdulmajid from Syria is different. The families, both part of the Samen Hier Group ‘Together Groos’, share their family lives with each other.

“Our favorite thing to do is being outside together’’, says Sanne (36). Like the other day, when she and her 2.5-year-old daughter Saar visited a park in Rotterdam West with Houda and her youngest, Rital. While the children were enjoying themselves in the sandpit, Sanne and Houda were catching up with each other on a park bench. They talked about the kids, but Houda also talked about Damascus, the life there, and their escape to the Netherlands. She showed videos of the city before the war on her phone. At times, Sanne heard her stories with astonishment: ‘’They’ve had such a hard time, but every time I see them they are cheerful.’’

Anis’ and Houda’s loud laughs are a symbol of the family’s cheerfulness, according to Sanne. ‘’A sense of humour and a positive approach to life is important to the family’’, she says. The parents stimulate all six children to participate in Dutch society. They give them confidence, including their 12-year-old son Mo, who has multiple disabilities. The two eldest children of the family are currently following secondary vocational training. Sanne: ‘’They gladly accept all help and really want to learn.’’

This pro-active attitude is something Sanne also recognizes in herself. It was a reason for her to become a part of the Welcome Group ‘Together Groos’. She wanted to fill her changing life – having a daughter, being housebound because of the coronavirus – in a different way and share it with people that could benefit from it. Although Sanne comes into contact with refugees through her job,  she knew little about the way they settle in the Netherlands. ‘’You don’t just walk up and talk to someone and through my work it would create an unequal dynamic. I have found a deeper and equal relationship now.’’ 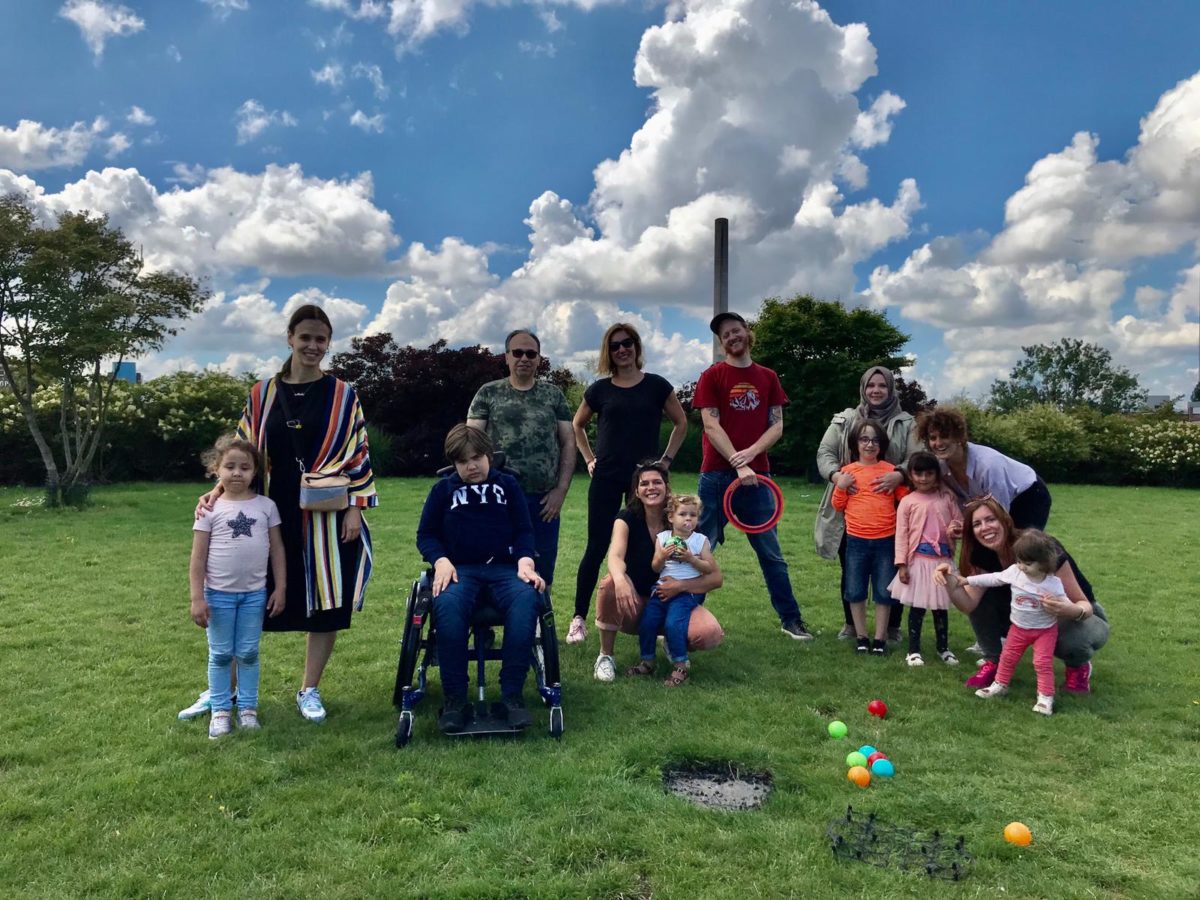 The members of “Together Groos” during an outing.

Being friends and not just taking control; it’s a process. In September, the whole group went to the Maritime Museum. The Abdulmajid family does not own a car, so Sanne proposed to pick them up at home by car. The group decided otherwise. One group member went with  Anis, Houda, and the kids to the museum by metro. ‘’You have to stimulate self-sufficiency, instead of dependency’’, Sanne says in retrospective. ‘’That might mean that you have to suppress your first instincts and act like you would with other friends. That is not always easy, but eventually it benefits the mutual bond more.’’

Sanne’s intents to continue with the programme. In principle, you commit to the Samen Hier Welcome Group for a year, but she prefers not to set an end-date. ‘’You don’t ‘do’ a friendship for a set period, it grows’’, she says. Every meeting with the family brings her something. ‘’I always come home cheerful and full of energy.’’ What Sanne also appreciates is the fact that her daughter experiences how friendship transcends cultural differences. ‘’An important lesson in our rather divided society’’, she thinks.

A month ago, at the playground in Rotterdam West, Sanne’s daughter bravely climbed one of the play structures. Houda encouraged her younger, one-year-old, daughter to do the same: ‘’Just follow Saar.’’ It struck a chord with Sanne. Two mothers, both raising a daughter, and a friendship that is becoming more and more natural.