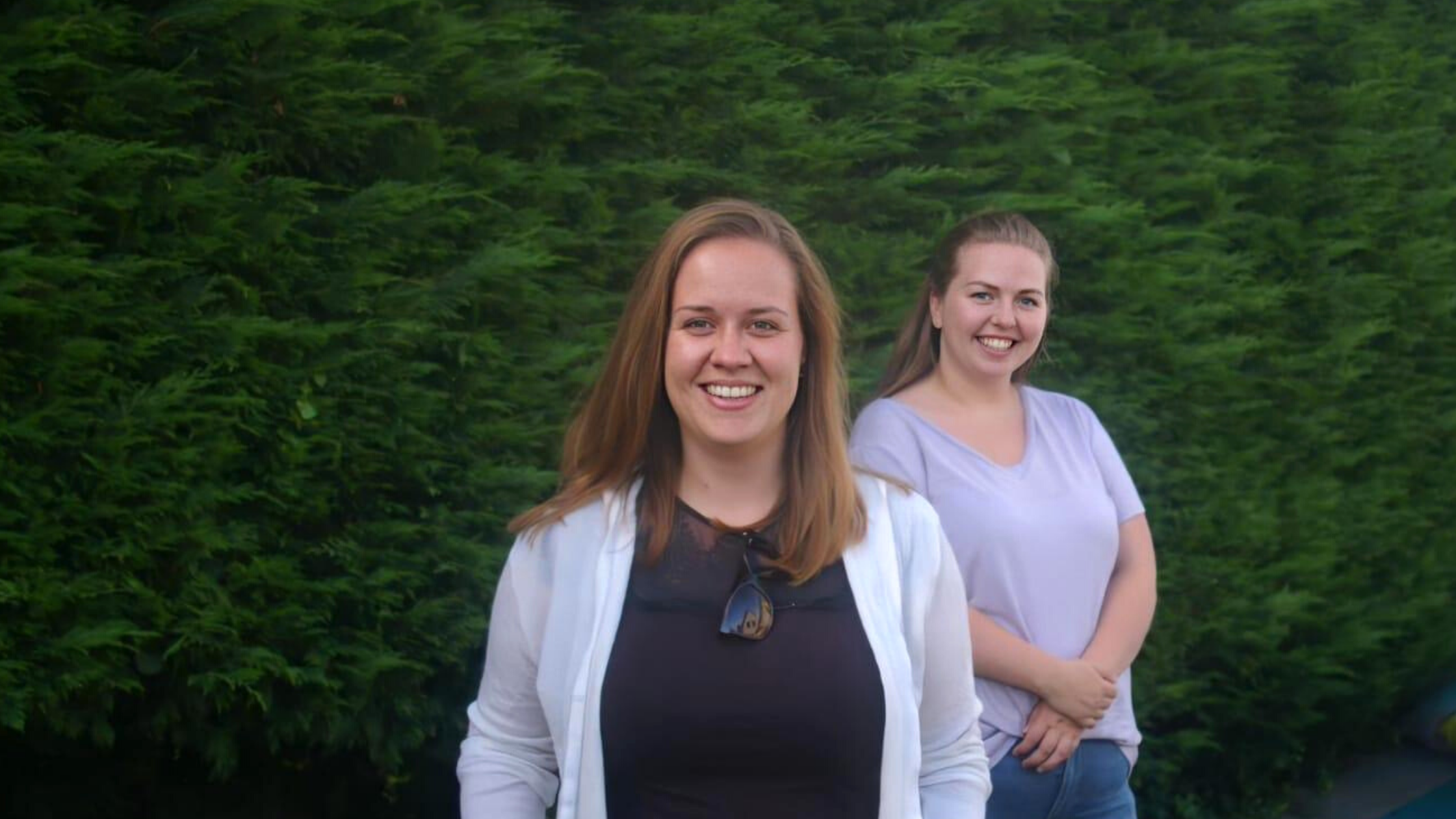 Through our initiative Samen Hier, Justice and Peace is building towards an inclusive and welcoming society for refugees. A society in which groups of friends, neighbors, colleagues, family members or other acquaintances are both capable and willing to take on the reception and integration of newcomers themselves. Abdul – originally from Egypt – was for example matched to neighbors Ciara, Marieke, Liselotte, Adam and Larissa from Welcome Group “de Aardbeitjes” (the Strawberries). Six months after their first meeting, Ciara, Abdul, Larissa and Marieke share the experiences they have gained so far through their participation with Samen Hier.

Photo above: Group members Ciara & Marieke. Abdul & Larissa are not in the photo for personal reasons.

Most of the group members have lived in Almere for most of their lives. When they first heard about Samen Hier during a meeting at housing complex “De Aardbei” (The Strawberry), Ciara, Marieke, Larissa, Liselotte and Adam saw this as a good opportunity to get to know more people from a different cultural background. The group element of Samen Hier additionally motivated them to join. Larissa: “If you participate as a group, and you are not able to take something on individually, then someone else usually can. I think that is a very nice aspect of Samen Hier, that you’re in it all together. It lowers the threshold to join.”

“I think that is a very nice aspect of Samen Hier, that you’re in it all together.”

Abdul has been living in Almere for about two years now, and will start a higher education preparatory programme by the end of this summer. For Abdul, participation in Samen Hier is not only important in order to learn more about the Dutch language and culture, but also to make friends of his own age in Almere: “Before I participated in Samen Hier, I mainly had contact with older people, so it was nice for me to make new friends who have the same age.”

The group usually meets every week and for example goes out to eat, play sports, play board games or to go to a café in the city center. Such activities create a good atmosphere among the group and give the feeling “that you are in a very informal setting and not on a visit”, says Ciara. Marieke agrees: “The contact we have with Abdul has taken a very natural course. We do not feel the need to meet with the whole group all the time, so instead we usually hang out in smaller groups of two or three, with whoever is available at the time”.

Larissa adds: “Abdul takes a lot of initiative as well, so it’s very easy to get in touch and build a relationship together. For example, whenever I’m around here in the city, I don’t feel burdened at all to message Abdul and ask “Hey, are you home? Would you like to go for a walk together?” Marieke adds that even in times of COVID-19, the group members kept in regular contact with Abdul, for example by sending tips with fun things to do in Almere.

“After I made Dutch friends, my English teacher noticed that.”

Participation in Samen Hier provides the group with concrete knowledge and skills. For example, a few months after his first meeting with de Aardbeitjes, Abdul was able to significantly improve his Dutch language skills: “After I made Dutch friends, my English teacher noticed that.” The teacher asked Abdul how his Dutch improved so quickly. Abdul explained to his teacher that he has been spending time together with his Welcome Group for several months now. “I’ve also learned a lot about Dutch culture and slang,” he says with a smile: “For example, that “Ally” is a commonly used abbreviation of Almere”. Larissa: “We also participated in the virtual tour of Samen Hier through Rotterdam, which was so much fun! I learned a lot as well.”

At the same time, de Aardbeitjes learn a lot from Abdul about Egyptian culture: “When we talk about something, we also ask what that’s like in Egypt. For example, we’ve learned a lot from Abdul about the country, the food in particular, ”says Ciara. Larissa: “Abdul is such a wonderful cook! I eat vegetarian and he prepares the most amazing dishes while taking everything into account, including allergies. Another group member is also vegetarian and two others eat halal, he takes all that into account and he prepares something for everyone. Also with an appetizer and dessert!” She also points in the direction of the TV in the living room: “I also watched this series with Abdul. We watch a lot of Egyptian TV or movies together, they are so fun and entertaining! ”

“As a status holder, you have a home, you have a residence permit, but then what? Then it’s still very difficult to find your way around. ”

In addition, de Aardbeitjes support Abdul in navigating the Dutch integration system. Abdul for example wanted to switch language courses because the level of his current course turned out to be too low for him, but he was not sure how to go about it. Larissa explains that refugees would also benefit from a support network after receiving their residence status: “As a status holder, you have a home, you have a residence permit, but then what? Then it’s still very difficult to find your way around.” It was great for Abdul that he could fall back on the Welcome Group in this case: They helped him write a letter to his case manager at the municipality, upon which action was taken.

Any tips the group would recommend to (new) participants in Samen Hier? Ciara: “If you discuss something about Dutch culture or way of doing things, ask your match how this is done in their culture. And undertake accessible activities: For example, go eat Dutch pancakes or cheese fondue together!” Abdul’s tip for participating newcomers is to not be shy and take the initiative yourself: “I used to not know whether it was normal to ask something to the group or not, but if you want to plan a meeting with someone you can just ask it yourself and you don’t have to be shy about it, it’s no big deal. Dutch people are very honest, so if they are free or if they really have no time, they’ll just say that to you. ”

Has the story of Abdul and de Aardbeitjes sparked your curiosity and would you like to form a Samen Hier community in your city? This fall we will start matching new groups again, contact us about the possibilities!