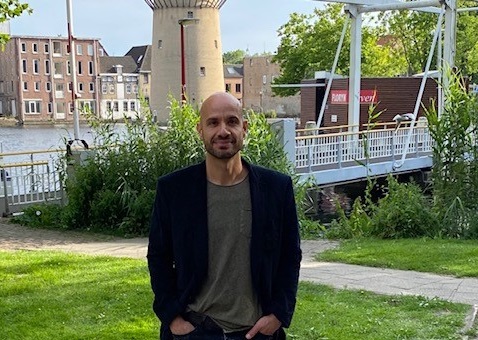 Mohamed, helping refugees overcome the obstacles he once faced as a newcomer

“I was so afraid of the authorities that I was too scared to tell them they had misspelled my name.”

In 1997, Mohamed fled at a young age from Iraq to the Netherlands. In the following twenty years he didn’t talk about his refugee background, fearing negative responses and the government. However, a lot has changed over the past years. Mohamed is no longer scared and is determined to help refugees overcome the obstacles he once faced as a newcomer. He therefore became a Cultural Ambassador at Samen Hier, where he helps Welcome Groups and refugees overcome linguistic barriers and cultural differences: “At Samen Hier, I can help refugees with their fear of the unknown”.

Mohamed remembers his arrival as a refugee in the Netherlands in 1997 like it was yesterday. It was a time when he felt completely lost, and the Netherlands did not immediately feel like home to him. Mohamed did not speak the language, which made it difficult for him to find his way in the bureaucratic system. He did not have any friends or family in the Netherlands either, so there was no one who could support him.

It made him anxious. He would, for instance, hide for police officers, scared to be arrested and maltreated. “As a newcomer, I never sought help of organisations such as The Dutch Refugee Council. I was scared that they would tell the Iraqi government about me. Everyone who flees from a warzone has that fear for a long time, even when they have fled to a save country like the Netherlands.” Muhammad’s distrust of the authorities also came with practical disadvantages. “I was scared to contradict the Dutch government, and therefore did not dare tell them that they had misspelled my name.”

In addition to the fear, Mohamed faced the overwhelming bureaucratic system of the Netherlands. “In Iraq, government organisations used to never send letters, but in the Netherlands everything is documented on paper.  It took me a lot of energy to get used to this. Not only because I was unfamiliar with the language, but also because I was unable to process the large amount of letters, procedures and appointments that I had to deal with. At the time, in the nineties, there was very little attention for our fears, and for the bureaucratic maze in which we ended up. We mostly had to figure it out ourselves.”

In 2006 Mohamed received his residence permit. This allowed him to start school and to find work as a security guard. He now has a wife and kids and understands the Dutch bureaucratic system. The fear he once felt has been taken over by an appreciation for the freedom he enjoys in the Netherlands. “I am a completely different person than I was twenty years ago. I have a big network of friends from different cultures, something which has really changed my perspective. Two things that characterise the Netherlands for me are freedom and tolerance. I have learned that everyone is allowed to be themselves.” What also strikes him is the Dutch openness and directness. “In the Arabic culture you are taught to always be welcoming to others. In the Netherlands you are free to say: ‘Not today’.”

At Samen Hier, Mohamed wants to share his experience with both newcomers and locals in order to raise more awareness. “I recognise so much of myself in the current generation of refugees. They are often scared to respond negatively to questions and requests, out of fear that this will affect their residence permit. When you are brought up with the idea that you are not allowed to speak up, it is very hard to let this go.” Mohamed wants to inspire newcomers to be themselves, and he wants to offer them support in their new place of residence. “Back in the day I was scared of the security guards in the asylum centre. Now I am a security guard myself!”

Do you live in The Hague and do you want to join Mohamed in working for an inclusive and welcoming society? Click on this link to find out what you can do!
SHARE