Jhon, 'You just cannot give up'

Jhon León is 31 years old, a graduate of Universidad Nacional de Colombia with a degree in political science. He lives in the capital, Bogota, with his partner and their cat. He works for the Unit for the Search of Persons Presumed Disappeared, which is part of the organisation established to implement the 2016 peace accords that ended Colombia’s more than five decades of armed conflict. 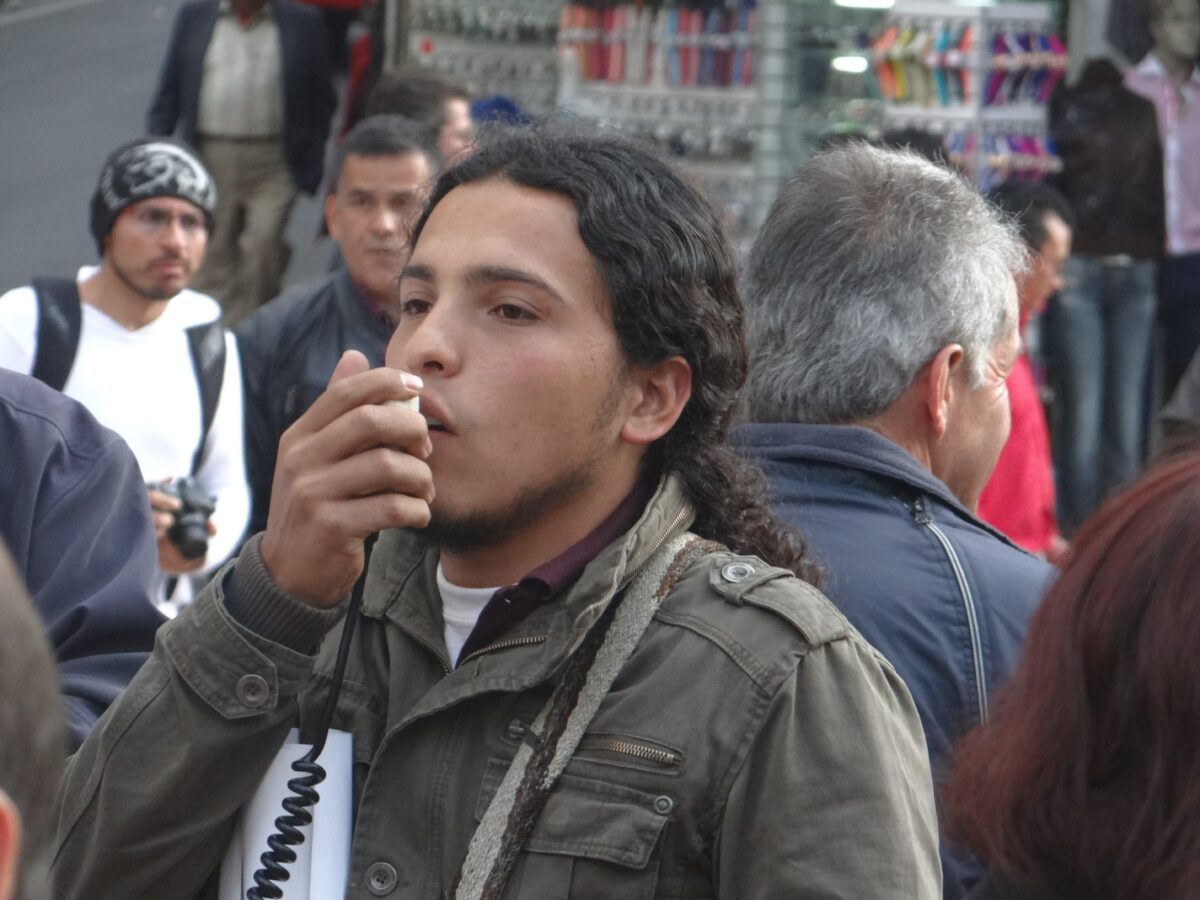 Jhon in 2010 in front of the facilities of the Ministry of Justice while participating in the campaign against the non-extradition of Colombians to the United States.

In 1964, fighting broke out between the government of Colombia, far-right paramilitary groups, and far-left guerrilla groups such as FARC. It is estimated by the National Center for Historic Memory, that more than 220,000 people were killed during the conflict, over 80 percent of them civilians. Around 120,000 people are still registered as missing. In 2016, an internationally acclaimed peace accord was signed between the Colombian government and FARC guerrillas that addressed the issues of poverty and inequality that had fuelled the war.

Jhon is part of a team that searches for those who are listed as disappeared in order to bring some level of justice and closure in a ravaged and polarised country.

“What we do is document where the remains of the disappeared/missing persons possibly are. In coordination with the institutional structures of the state, we search the terrain and, if possible, identify the victims and give the bodies a proper burial.” 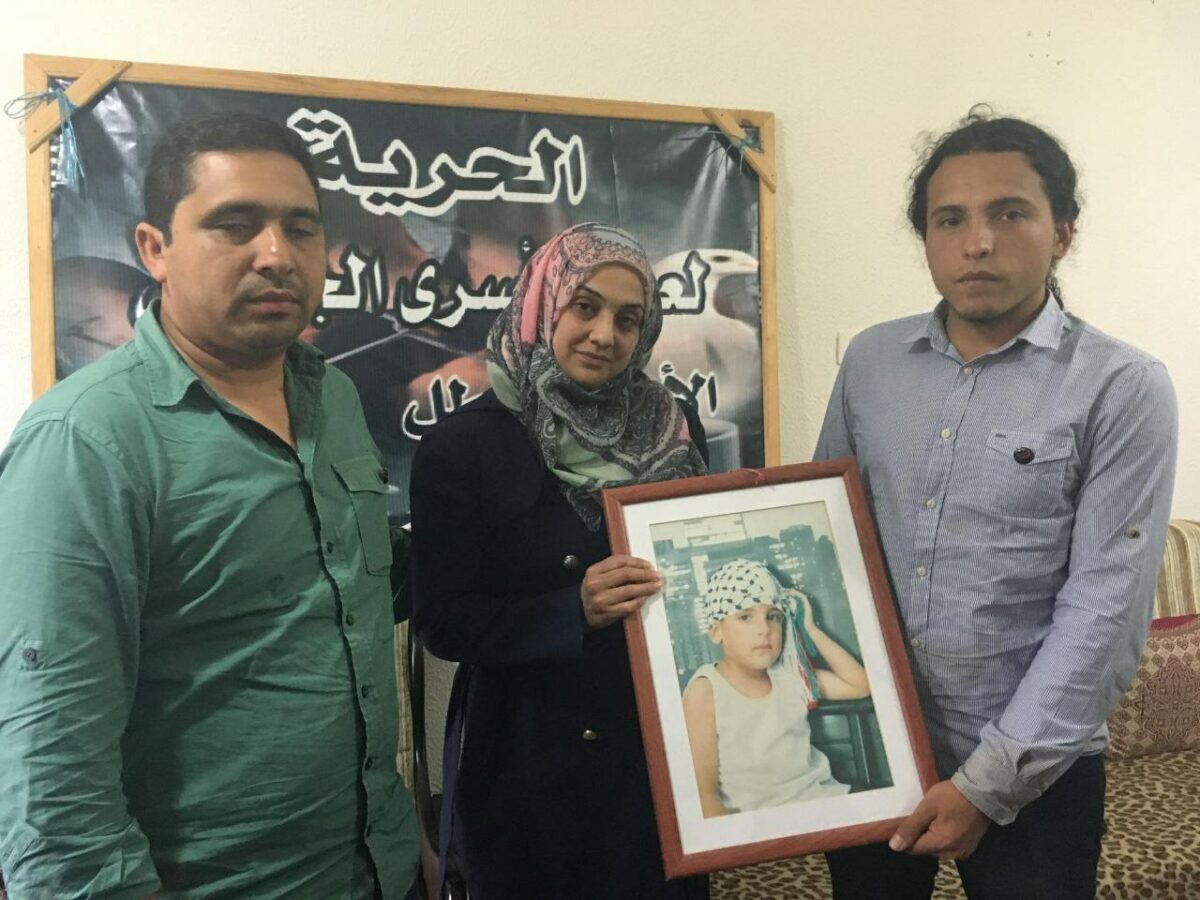 Jhon in Palestine in 2014, during a visit by a delegation of human rights defenders to the relatives of people detained and affected by the Israeli occupation. One of the children of the woman in the photo was killed and others were arrested.

Five years into the implementation of the accord, tensions between rich and poor, rural and urban, drug traffickers, independent farmers and powerful landowners have increased: violence is often seen as a quicker solution to a problem than public debate and dialogue. In 2020, Front Line Defenders estimated that more than half of all the world’s murders of human rights defenders occurred in Colombia.

In 2021, Jhon received several written death threats and was shot at while travelling with his team in a van clearly marked with the organisation’s official logo. Thankfully, no one was hurt. In bringing these incidents to the attention of the proper authorities, he discovered that he was the victim of identity theft where he was made to look like member of an illegal right-wing paramilitary group. What complicates his ability to protect himself from these threats is the fact that he doesn’t know who is behind them.

According to the UN High Commissioner for Human Rights the perpetrators of past murders of human rights defenders were attributed to: 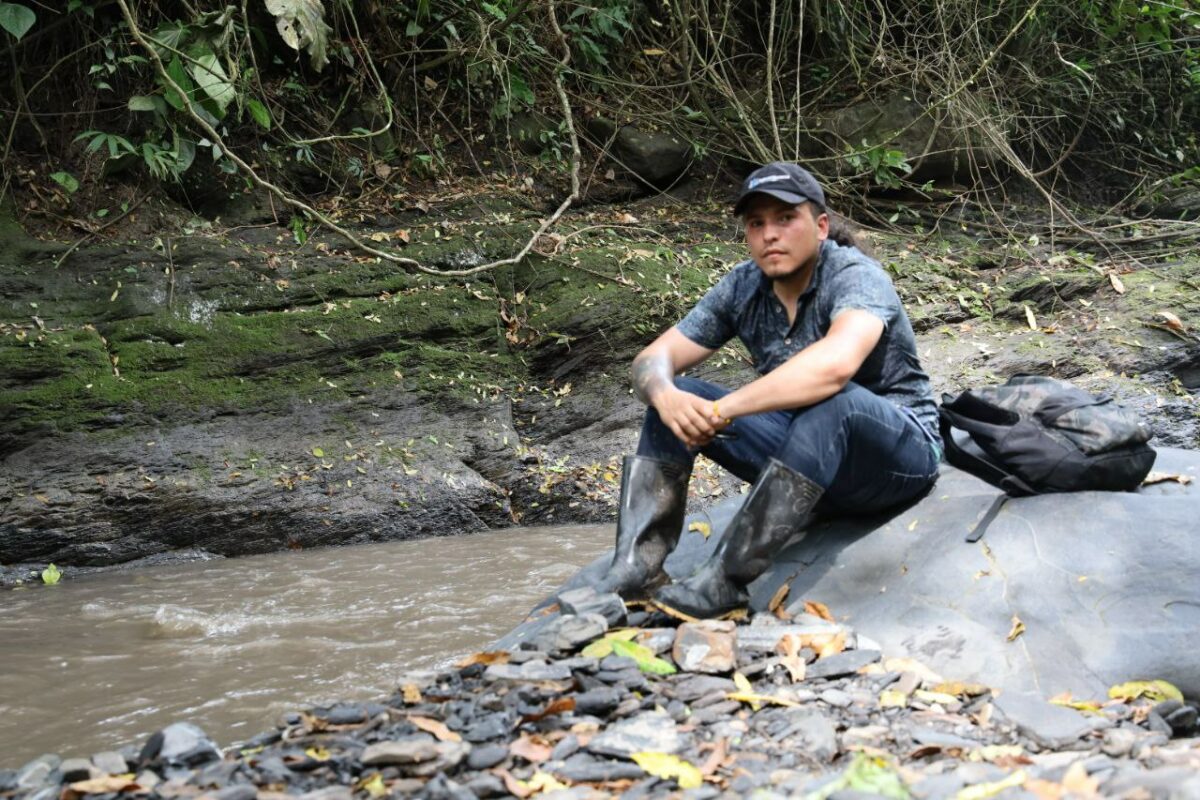 Jhon in March 2022 in a rural area of the department of Cundinamarca, where he was looking for the remains of a person who died in the conflict.

Given the insecurity he faces, how does Jhon stay determined to continue his work?

Born and raised on a farm in rural Colombia, Jhon experienced first-hand the discrimination and inequalities that are at the heart of the country’s conflict. Often isolated and under-serviced, small farmers develop self-reliance, determination and creative problem-solving skills in order to survive. Excelling at school, he became the first in his family to go to university.

Jhon attended the Universidad Nacional de Colombia, the nation’s top public university, where he came into contact with student activists from indigenous, rural, and afro communities.

‘It gave me the opportunity to ‘drink out of’ different discourses on equality, justice, the fight for free and high-quality public education. I became sensitized about political prisoners and how our prison system affects human rights, particularly of the poorest in Colombia.’

Through a professor in his department, he became involved in a project with FARC prisoners which enabled him later to take part in the negotiations that led to the peace accords. Now, after more than three years on the job, Jhon cannot conceive of stopping his work.

‘When you do this work, and you work directly with relatives, and sometimes you are fortunate to find a disappeared person, you understand the value of what you do for the people. Then you just cannot give up.’

Jhon recognises that the peace process is not perfect. Given weak institutions, corruption and the criminality associated with the increasing power of drug cartels, implementing it will continue to be difficult.

But Jhon is convinced that it is the best plan Colombia has. ‘Without peace there are no human rights.’ Despite the personal risks he faces, Jhon has no intention of stopping. In fact, instead of scaling back to minimise risks, he intends to increase his public profile.

“Without peace there are no human rights” 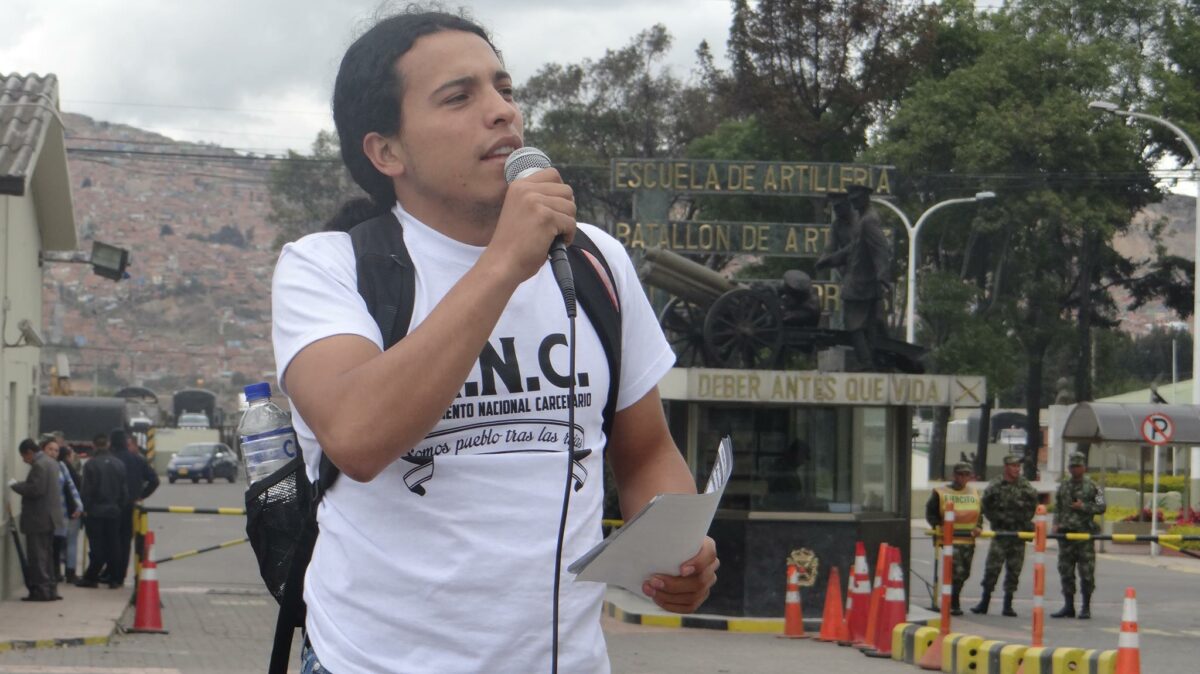 Jhon in front of the Picota prison in the city of Bogotá in October 2013, while participating in the protests over the treatment of political prisoners in Colombia.

Jhon spent 3 months in the Netherlands as part of Justice & Peace’s Shelter City initiative. He has thought about the threats he faces and differentiates between two types: those you can control and those you can’t. For the ones he can control, he takes sensible measures. The security training he received allows him to be even more vigilant and has given him ideas on how to mitigate risk in his home and office, in travel between the two, in securing his communication.

In the case of the risks he cannot control, ‘Of course, I have the option to hide or lower my profile, go away or not do certain things any longer.’ But this is not an option for Jhon. Instead, ‘… I’ve tried to give more visibility, raise awareness, to share these things more. This does not mean that the risk has gone away, but I believe that it is more difficult [to kill someone] when you are part of a community that provides support.’

“I’ve tried to give more visibility, raise awareness, to share these things more. This does not mean that the risk has gone away, but I believe that it is more difficult [to kill someone] when you are part of a community that provides support.”

He intends to increase his network, do more lobbying, both internally and internationally. ‘Next year, for example, Colombia will host an international conference on human rights defence. It is important to raise awareness and, on the contrary, not lower the profile, but make the work more visible.’

During his stay in Shelter City in the Netherlands, Jhon met human rights defenders from around the world. This experience made him aware of the fact that his work is part of a global movement.

‘We are all doing our work, each one within their own context, of course some with problems greater than others. And the best way to show solidarity to other colleagues in different parts of the world is if everyone does as much as possible and to the best of their ability. If everyone does their work, we will all progress a bit more and that way we can change the world.’ 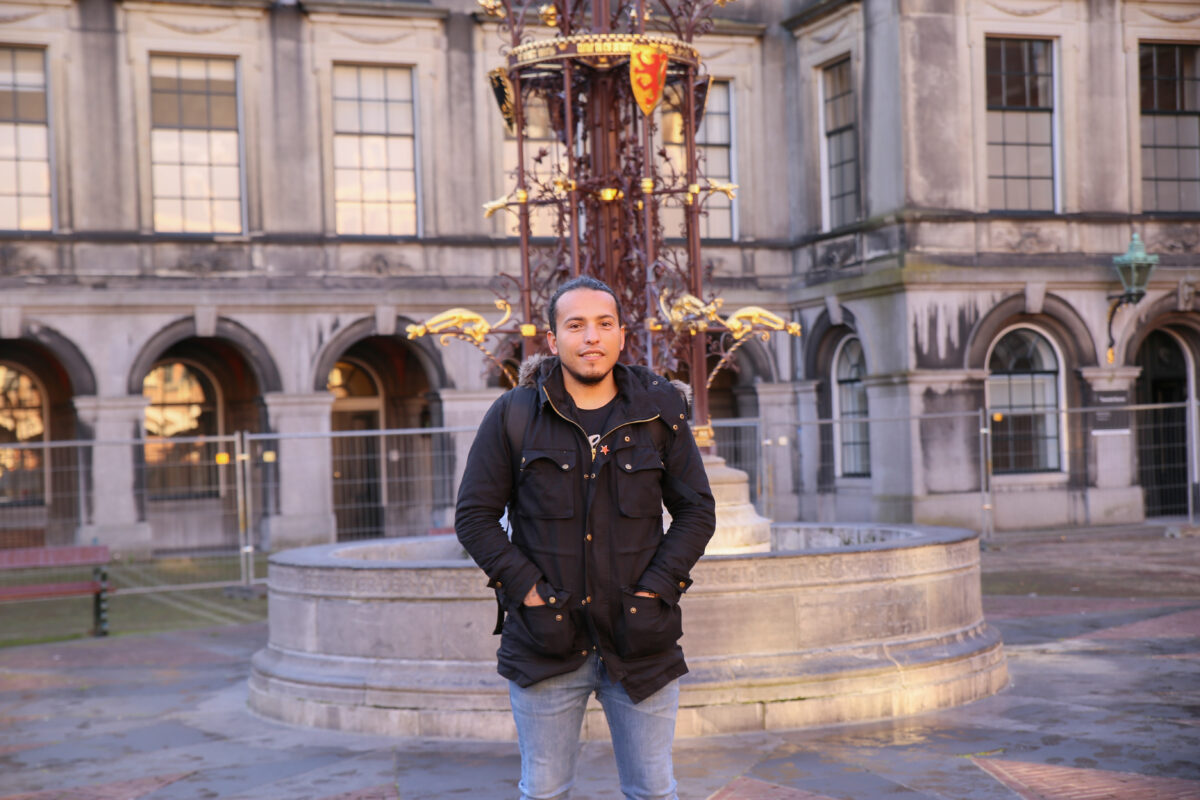 Jhon at Shelter City The Hague in 2021, where he stayed for three months to rest, expand his network, and strengthen his skills.

Hope for the future

He has hopes for the future. The elections of 2022 brought in a government that is more supportive of the peace accord than the previous government. His hope for Colombia? ‘It’s a simple petition: don’t kill the people.’

His hope for himself? ‘I think that with time I will return to the farm. I came to the city, got a job, but I think that in the future I’d like to return to work on the land.’ 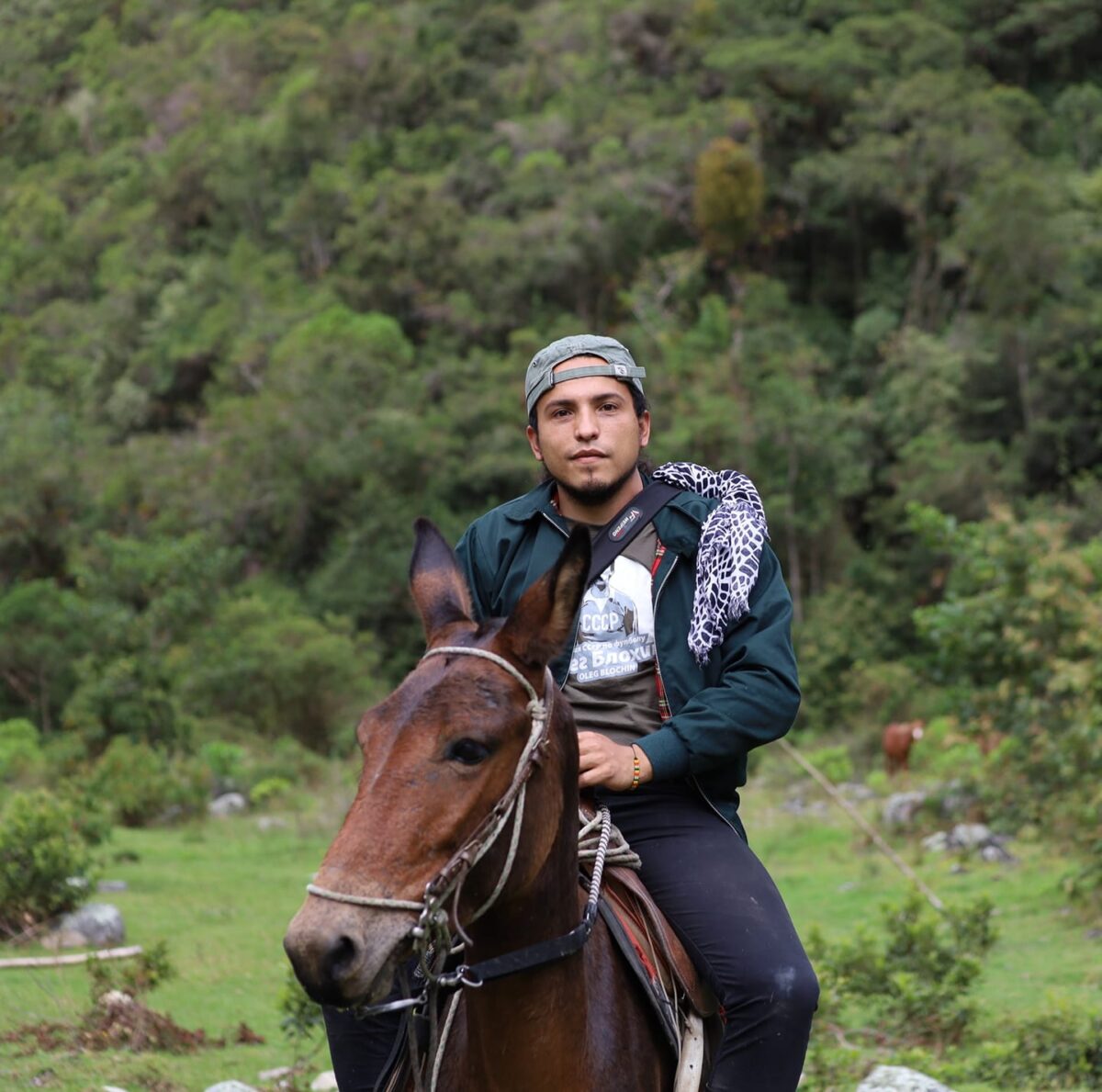 Jhon in April 2021 while on a mission with former FARC-EP combatants in search of explosive devices to decontaminate the territory.

Do you want to help us support human rights defenders like Jhon?

Jhon Leon works in Colombia, one of the deadliest places in the world to be a human rights defender. Given the risks he faces, how does he find the strength and determination to keep going?