Evelien, advocating a self starting society that proactively welcomes refugees

“If we show up with expensive gifts, they might feel uncomfortable”, Evelien says. “You know they don’t like us paying for things. Let’s ask around to see if our friends have some nice things. If Laila and Amer agree, of course.”

Evelien Dietvorst (29) appreciates how clearly the Syrian family communicates with the Samen Hier group about what they do and don’t want. This already started with their second meeting, in the Children’s Museum, after someone got drinks for the kids. Laila took Evelien aside and explained: “We have five kids and little money. Taking the metro is already too expensive, let alone buying drinks. When you pay for things, we have to return the favour. We would love to do things with you guys, but prefer if these were free.”

Act normal but be culturally sensitive at the same time – it’s what characterises this Samen Hier group from Rotterdam, which has been active for over a year. Last Summer they got together to celebrate ‘the end of corona’ with a barbecue in the park. During the previous months, the group had taken the kids out for a few hours every week so that Laila and Amer could get some rest. “Just as I would do for a friend”, Evelien says. “What we give to their family – and they to us – consists of small things like that. Nothing big and immersive.”

It was a special and educational year during which Evelien, who is a doctoral candidate in child and adolescent psychiatry and mental health, was sometimes astonished by the limitations of the integration process in the Netherlands. Research shows, for example, that kids whose parents have been educated outside of the Netherlands often have lower prospects for their own education. Their limited knowledge of the Dutch language can impact their test results, for example, even when they do have the intellectual capacity to do well. Laila and Amer’s eldest is already facing this problem. “Her tests aren’t suitable for someone who has only been in the Netherlands for four years”, Evelien notes. “I would say that it makes sense to test them later, or to adjust the school tests. Her current results will impact her choices for high school – kids don’t always have to get the highest results, of course, but they should be an honest reflection of their level.”

According to Evelien, there are also more subtle indications that the current system is flawed. When one of the girls requested help with a paper, the group was happy to offer this. Later, in her class, she was immediately asked if she had received any help. “Pupils whose parents are Dutch don’t get asked this question so easily”, Evelien says, “even though they also receive help.” The group has talked a lot after this incident – about this bigger problem that manifests itself in their world at a small scale. Evelien: “Our discussions are a lot deeper because of these stories. But I keep wondering how we can take the issue to the next level.”

She refers to the general challenges of integration, which many people see as the government’s responsibility. The academic, however, thinks that societies themselves should take a more active role in the process. “Winning the enthusiasm of the people around you, for example by participating in Samen Hier, is a good start. But you can’t force them, the commitment has to come from within. I have friends who would be interested in helping refugees settle in the Netherlands, but they rarely take the actual step. I would like everyone to know that you really don’t have to radically change your life in order to contribute to a welcoming society.” 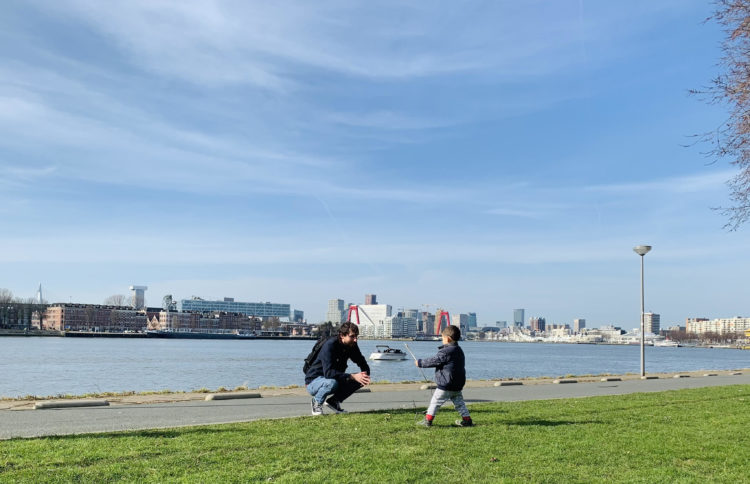 For Evelien, this contribution could also be made through her scientific research. The experiences she’s had over the last year could really contribute to this, she indicates. The way she sees it, “it might provide guidance.” “It’s not a coincidence that I ended up here – I gravitate toward topic like integration and its effects on children. I wish that all kids in the Netherlands would have the same opportunities. Also I would like to get a better grasp on methods of integration, so that we could make this a communal responsibility for all Dutch people.”

Currently Evelien is researching the impact of the corona pandemic and its measures on the emotional wellbeing of kids. For this, she had to shoot a promo-video, in which Laila allowed her kids to feature. “She trusts that we do the right thing, and the feeling is mutual”, says Evelien. “The other day, I asked Laila if she is alright with the influence we have on her family. Her response touched me: We chose you to influence us.”

“It’s in our system”, Evelien describes the general feeling within the group. If it freezes, someone will soon ask where to go ice skate. If the weather is nice, we’ll soon have planned a trip to go swimming in the Kralingse Plas. And whenever it’s someone’s birthday, we send cards. Not only is the group going strong – it’s even gained two members. Two participants have had a baby since the initiative started. Evelien: “With their parenting experience, Laila and Amer are being true role-models. We really keep learning from one-another.”