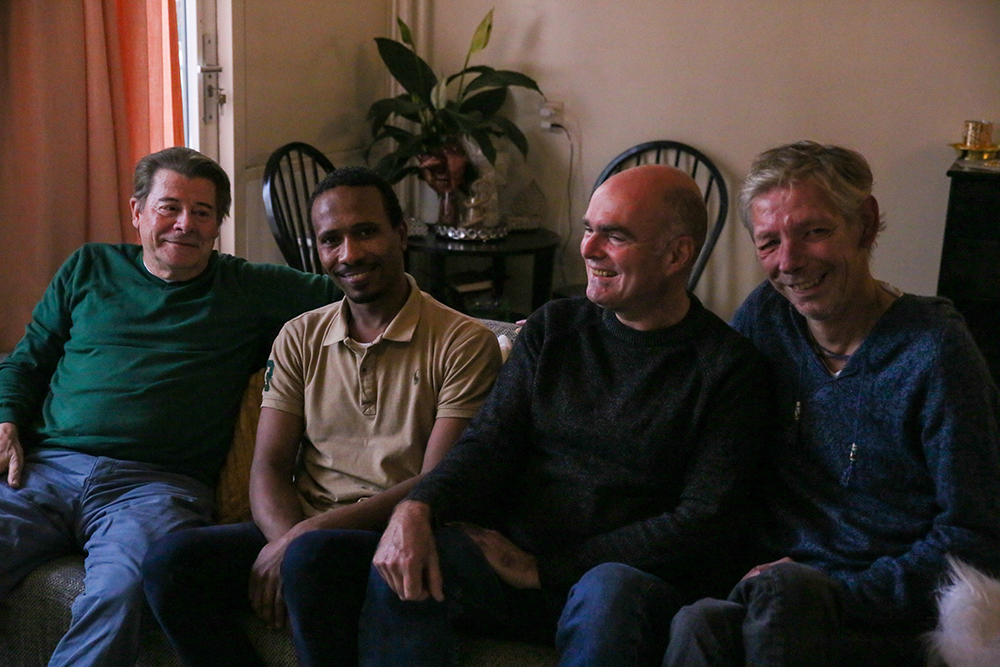 ‘’I want to join for another Samen Hier year: with Abdalla as group member…”

At the start of 2020, Bart received a flyer in his mailbox: Samen Hier started a new concept in the Netherlands and was looking for groups to support a person, at that moment still living in a refugee camp, for one year. Bart, 77 years old and currently retired, spent his working life as a teacher and student counsellor in high school. He immediately got excited and it seemed like a good fit and a nice experience. He asked his friends, the couple Ruud (51) and David (59), to form a group together. We matched Bart, David and Ruud as Samen Hier group to Abdalla (33) from Sudan. The context of this match was exceptional. Less than a month earlier, Abdalla still lived in dire conditions in Egypt. He was able to take a flight to the Netherlands through the resettlement program of the UN Refugee Agency. Bart, David and Ruud made sure that he received a warm welcome in Rotterdam last year.

I enter a house where you directly feel welcomed: soft, relaxed music is playing and the house is nicely decorated with an eye for detail. The table is filled with sweets and Abdalla is making tea and coffee. Ruud and Bart tell me how decorating the house was one of the first tasks that they supported with upon Abdalla’s arrival: “The television was from our neighbours”, ”Then we picked up the cabinet”, and “These chairs have been standing in our living room for weeks. The whole room was filled with furniture for Abdalla”, they complement each other. “People are really supportive. Many offered stuff by themselves.” Abdalla completely created his own style with the furniture that was offered. Bart shows me how Abdalla covered the kitchen cupboards with fabric, painted the chairs black and the side table golden. Everything breaths a good atmosphere. Ruud: “We collected basic things but over the months, he created his own atmosphere in the house.” Bart: “It is totally Abdalla.”

Bart would like to ask a question before we start the interview: “How did your test go, Abdalla?” It turns out he passed his first Dutch A1 level test with just three mistakes. He will start with level A2 on Tuesday. Bart: “I am so proud of you!” Turning to me, he continues: “He reached this level in a mere five months, that is really impressive.” Abdalla only uses the Google Translate app when the conversation goes a bit too fast. He tells me that he worked in elderly care in Egypt. Bart adds that he would like to continue this: “As soon as he speaks the language even better, he can start looking for a job.”

Abdalla brings in a delicious Bessima cake – an Egyptian coconut cake – and we start reflecting on the past year. At Samen Hier, groups of Dutch citizens are matched with new comers with a refugee background. Last year we started with the community sponsorship model that allows people living in refugee camps to move into a community straight away. In this way, they don’t have to take dangerous routes in order to reach Europe. The model offers a safe alternative to come to the Netherlands where they are welcomed by a Samen Hier group. The groups support with practicalities around moving and settling for a minimum of one year, and offer their time, expertise and network to build a solid foundation for the new comer. Two groups in Rotterdam were the first to participate in this new variant of Samen Hier. One group supported Abdalla and the other Yassin. Today I am talking to the group supporting Abdalla. They have known each other for exactly one year. Bart, Ruud and David supported Abdalla with everything he needed from the moment of his arrival in Rotterdam. However, Abdalla’s group is not going to leave it at just this one year. Having experienced this himself, Abdalla wants to form a new Samen Hier group together with Bart, David and Ruud to welcome another person or family resettling in Rotterdam.

“I cannot imagine someone resettling to the Netherlands without the support of a group like us.” 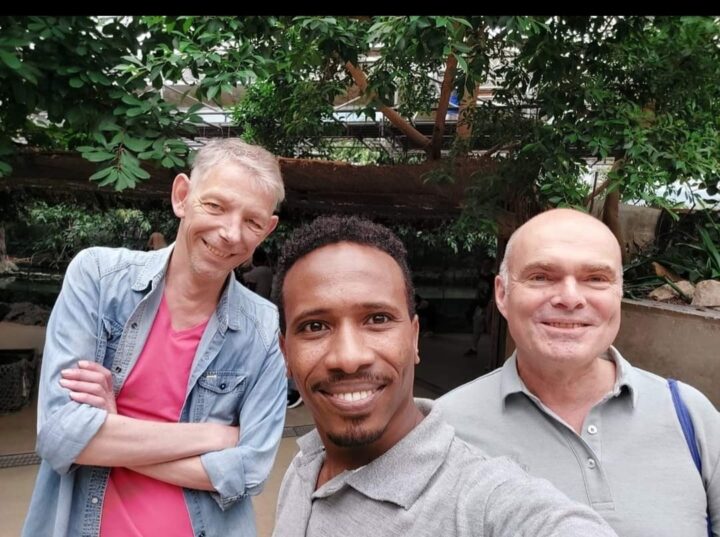 Abdalla came to the Netherlands in December 2020. The first contact with the group was digital, through videocall. Abdalla stayed in quarantine in Friesland for the first two weeks, after which he could move to his temporary home in Rotterdam. That is where David, Ruud and Bart were ready to welcome him.

“The first contact was getting used to each other. Someone fled their country and arrives with nothing. What can you say and what not?”

Bart shows me a few pictures of Yassin and Abdalla’s arrival in their first, temporary home at the Josefstraat, receiving the keys while wearing facemasks. The group received the keys a few days earlier to make sure everything in the house was in order and to bring some groceries. “We cooked together for the first few days, do you remember Abdalla?” Ruud asks. He also celebrated Christmas together with Ruud and David that year: a very warm welcome.

On Friday January 8, the group receives a phone call that a permanent home is ready for Abdalla, and a busy time starts for all four men. Apart from moving, they started doing jobs in the house and decorating. They laid a floor, painted walls and furniture and supported Abdalla with practicalities such as installing the television and WiFi. Apart from these jobs, the group wanted to make Abdalla familiar with his new city. This was hampered by the covid restrictions that were in place. David: “It was difficult because everything was closed. We took Abdalla out and showed him shops but we had to explain that everything was closed because of covid. Usually, you would be able to undertake a lot more. Now, you could only see the city from the outside, so to speak.” In the beginning, there was a restriction that you could receive only two visitors at a time which meant that Ruud, David and Bart could not visit Abdalla all together. 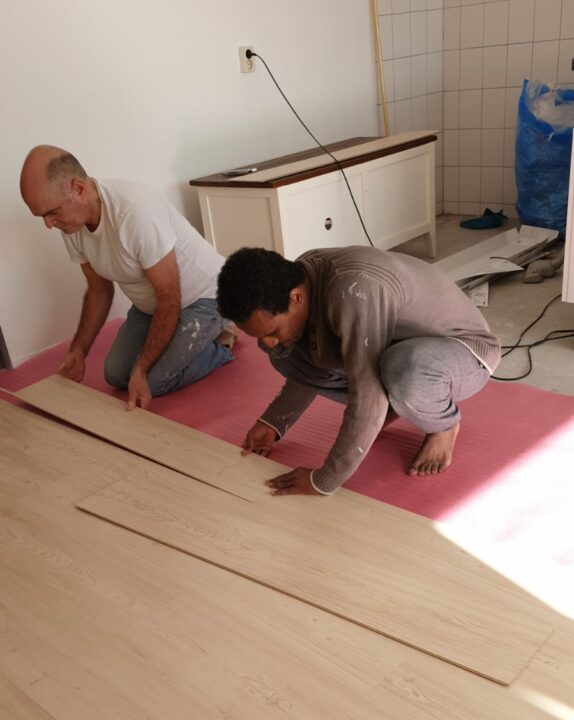 Luckily, there was also an upside to the covid restrictions. One time, David and Abdalla could make a private shopping appointment to go to Blokker. “It was just the two of us in an empty Blokker, with two staff members at our disposal,” David mentions. “It was quite a job to fill his house. Suddenly I found myself driving to Gouda to pick up a stove somewhere.”
A special art work is attached to the wall. When I ask Abdalla about it, he explains that it is an art work from Juan, contact person from the group. Whenever they have a question, they can always call him for advice. Juan moved to the Netherlands through resettlement from Chile many years ago. Apart from working as a contact person for the groups in Rotterdam, he is a painter. He allowed Abdalla to choose one of his art works for his new home.

Apart from decorating, there is a lot more to do when you arrive in a new country. Bart: “I wrote everything down, sort of like a diary, so I know exactly what I did. The first three months were really busy.” David adds: “Yes, I was doing jobs every weekend.” Abdalla also asked them to join him to appointments with the municipality because it is easier to figure that out together and get some support with the language. The group explains that they had to invent the wheel at some occasions, despite the elaborate Samen Hier script that they received. David: “My expectation was always: we will see whatever is needed. In that sense, a perfect script is impossible because things turn out different in reality. For example, the script didn’t including that the housing corporation shut down electricity and it would take us days to fix that.” 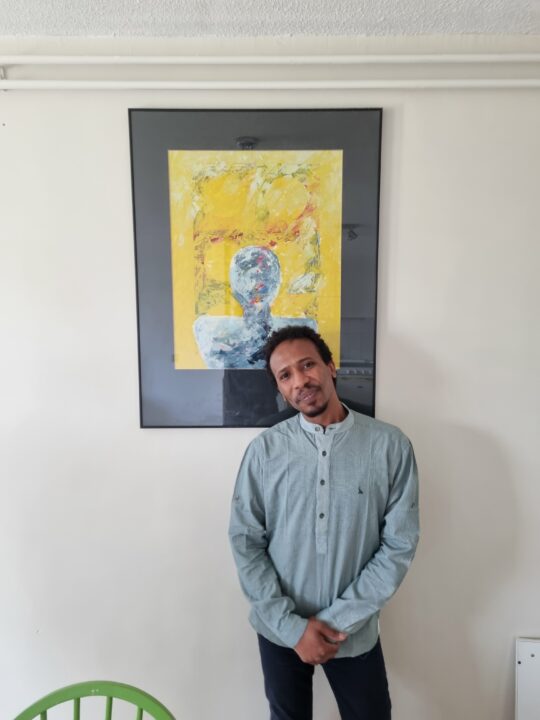 Meanwhile, Bart is still turning pages in his diary. “On January 15, I had a very busy day…” He has many stories about the municipality and the general practice centre. Abdalla had an acute toothache and urgently needed to see a dentist. It was not immediately clear whether this would be covered by insurance or not. At these moments, it is nice that someone can support Abdalla in figuring this out. I ask Abdalla what he thinks of the support he received. He provides me with an extensive answer in Arabic through Google Translate. The answer that appears in the app is far more poetic than we could have expressed it in Dutch. A few words were lost in translation but I understand that despite it being difficult for him in the beginning, he felt very good together with the group. Abdalla explains: “Especially the language and contact with people outside were difficult for me. I felt increasingly more comfortable with the group. Their support was very nice, I could always count on them.” Abdalla also tells me that he is happy with his spot in Rotterdam. Some of his friends live in Amsterdam but he finds it too busy and feels more at home in Rotterdam.

During the conversation, I slowly work out that there is a clear division of tasks that each group member takes on and enjoys doing. Bart supports Abdalla, and sometimes Yassin as well, with formalities such as banking or appointments with the municipality. Bart: “Sometimes I give a bit too much information, too much input at once. Then I repeat it at another time.” “I enjoy social activities the most,” says Ruud laughing. Abdalla and Ruud spent many summer afternoons on a terrace together. Ruud and Bart explain that David is very handy and he and Abdalla take on more practical, hands on tasks, such as fixing electricity and installing WiFi.

The group regularly goes on trips together. Kinderdijk, Blijdorp, Dordrecht and Kralingse bos are just a few examples. Another trip is coming up soon. When asked what the most enjoyable or special thing was they did together, they reply: “Actually to us, every day is special.”

The group notices the second half year was a bit more relaxed than in the beginning of their contact. Abdalla has settled down and moreover, he is very busy: he goes to school for three days a week. He just received a new study book with lesson material for the civic integration exam. Bart: “I explain to him the difference between the municipality, province and the state, democracy. It is not easy.” The group expects to be able to support in finding a job soon. Bart thinks that Abdalla will be ready to enter the labour market in four months’ time.

All men agree that the previous year was an enriching experience. Abdalla: “They are like family to me. They were always there for me, even in difficult situations. I did not feel like I needed anyone else because they were here for me.” Bart: “It was a lot of fun and a true enrichment of my life. In all aspects: taking on the challenge to build trust and safety but also just getting to know someone new.” Ruud: “It really is a double-edged sword, you are doing it for someone else and for yourself.” David: “It is a very nice experience.” Bart: “Well, we haven’t talked about this yet but I would like to do another year of Samen Hier: with Abdalla as a fourth group member…”