What can we as citizens do to ensure that refugees can come to the Netherlands safely? Inspired by Italian and Canadian examples, Justice and Peace became interested in “community-based sponsorship”. Through our Samen Hier programme, we are now building a network of Dutch cities and villages where groups of residents can take the lead in the arrival and reception of refugees. But what is community-based sponsorship, what is its potential, and what can we learn from examples in other countries?

During the “Reframing the Migration Debate” event we asked this to Jennifer Hyndman, who studies the Canadian community-sponsorship scheme, to Cecilia Pani from the Italian Humanitarian Corridor of the Sant’Egidio Community and to Maaike Graaff from Justice and Peace’s Samen Hier programme. Over a hundred people from all over the world joined the event for an evening of international knowledge-sharing on community-based sponsorship and safe pathways for refugees. The event was moderated by Leila Prnjavorac; presenter, radio host and herself once a refugee. 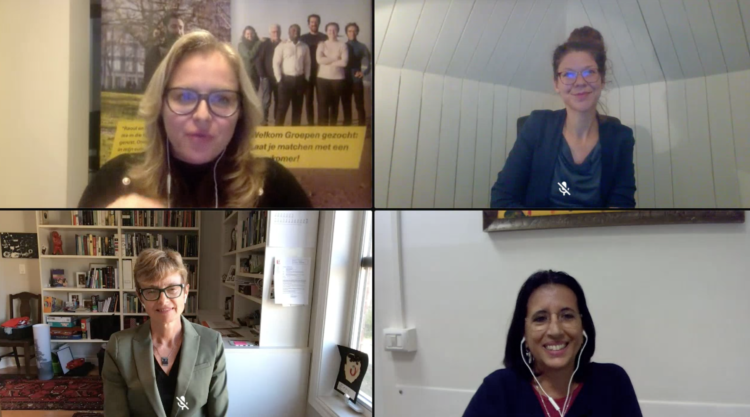 The migration debate in Europe often focuses solely on halting irregular migration and on the success or failure of integration policies. With one percent of the world population currently displaced, too little attention is paid to the fact that refugees often don’t have the possibility to reach countries through legal and safe pathways. Communities (of ‘ordinary citizens’) and civil society organisations across the world have therefore come up with new ways to enable these much-needed pathways and to take the lead in the resettlement and welcoming of refugees.

“From my own experience, I know how important it is to have a safe haven to go to.”  – Leila Prnjavorac.

Professor Jennifer Hyndman researches the settlement, participation and social inclusion of refugees in Canada. Forty years ago, Canada was the first country in the world to introduce such as private sponsorship programme through which to date more than 300,000 refugees have become Canadian citizens. Throughout the years, Jennifer Hyndman developed a special interest in the motivation of long-term sponsors, asking herself why these volunteers continue donating their time and money to support people they haven’t met yet. Her research showed that many of the sponsor groups form in and through community organisations with shared interests and through faith groups, and that many sponsors join because they have been asked to do so by someone in their personal network. Moreover, almost all sponsors simply describe sponsorship as the ethically right thing to do.

“It is a positive act of civil society stepping up, in what in some ways is unparalleled volunteerism, activism and community organisation” – Jennifer Hyndman

So how can one explain the rise of the Canadian sponsorship scheme? As highlighted by Jennifer Hyndman, research showed that the Canadian private sponsorship programme could blossom due to political leadership in support of refuge reception, the capacity of civil servants to enable and support programmes, positive messaging from the media and widespread public support.

“It doesn’t have to happen on the national level, it think it can happen on the community level. […] Communities can do this, this is a community practice.” – Jennifer Hyndman

Italy: a partnership between civil society and the government

Faced with the human tragedies in the Mediterranean, Italian civilians created a safe and legal route for Syrian refugees from Lebanon in 2016: the humanitarian corridor. The programme has since been expanded to include Sudanese, Somali and Eritrean refugees from Ethiopia, and humanitarian corridors to France and Belgium. Since 2015, the corridor has been able to bring nearly 2,000 refugees safely to Italy.

Cecilia Pani is the Programme Leader for Ethiopia of the Humanitarian Corridor of the Sant’Egidio Community. As she explained during the event, the Italian approach is different from the Canadian one. In the Italian humanitarian corridor project, refugees enter on an humanitarian visa and only apply for asylum once they have arrived in Italy. This novel practice speeds up the asylum application, as potential beneficiaries have already been checked by local organisations and the Italian authorities before arrival.

Cecilia Pani highlights that the Sant’Egidio Community was able to agree on the programme after long and difficult negotiations with the Italian institutions. She states “The humanitarian corridors are safer for everyone. They are safer for refugees who do not travel by boat, but with a scheduled flight. They are also safer for the country that receives them, because the refugees are identified before take-off.” Moreover, the programme is less expensive, as costs are borne by sponsors instead of governments and as refugees don’t have to pay smugglers to bring them to Italy. Most importantly, Cecilia highlights the positive benefit once the refugees have arrived in Italy:

“The result is an immediate relationship with the population, the rapid integration in school to learn Italian for the adults, the immediate enrolment of children in state schools en in the future a larger network to find a job and become independent.” – Cecilia Pani

Through the Samen Hier programme, Justice and Peace is working on developing a Dutch variant of community-based sponsorship. As recent political developments have shown, there is a challenging political context when it comes to increasing the resettlement quota in the Netherlands. However, Maaike Graaff believes that this shouldn’t stop one from working on community sponsorship. “By taking our own responsibility, we show our government how much this matters to us.” In 2021, Justice and Peace therefore plans to build a national network of at least ten Samen Hier cities and villages in which citizens will lobby local governments to welcome refugees and in which refugees will receive support through Welcome Groups of five citizens and a broader support network. As Dutch cities can individually decide whether they would like to participate in the resettlement scheme, raising awareness and lobbying cities can help create the needed infrastructure and support to eventually scale-up the resettlement quota.

“Sponsorship provides a missing link between the global refugee protection challenges on the one hand, and our local context as citizens one the other hand […]  It’s about our role as citizens in what I would say is one of the most pressing human rights issues of our world today” – Maaike Graaff

In 2020, Samen Hier already initiated a pilot project with 40 Welcome Groups in four different Dutch cities. The first results of this project show that 80% of the refugee families and more than half of the Dutch participants highlighted that the project had changed their lives. Moreover, more than 60% of the people active in these groups hadn’t been active on refugee projection before. The pilot project thereby shows that through community-sponsorship new and active groups of citizens arise.

“Community sponsorship offers us the chance to do something in our own towns with our own friends.” – Maaike Graaff.

Throughout the event, all three speakers clearly showed that active citizens can truly play a vital role in the international protection of refugees. As a bottom up approach, community-based sponsorship allows local communities and municipalities to influence the national government and through their local actions create international solidarity.

This event was part of The Hague Just Peace Festival.

Would you also like to contribute to the creation of safe pathways for refugees in the Netherlands and become part of a community sponsorship movement? Go to samenhier.nl to find out more!
SHARE