To keep the Welcome Groups connected during this time, our Migration team has been busy organising a series of online events for and with the Samen Hier community. The very first of these events was led by Samen Hier participant, Khadijeh, with an online Syrian cooking workshop. In this workshop, Khadijeh cooked the Syrian dessert Mhalaya, together with the participants via an online video call.

Khadijeh has been participating in Samen Hier since earlier this year and is matched with a group of five locals in Rotterdam. Besides two of her group members, twelve other Samen Hier participants from Rotterdam, The Hague, Haarlem and Almere also participated. This online event was the first in a series, with the next being a virtual tour of Rotterdam, a musical evening and, if it is up to the participants of Khadijeh’s workshop, even more cooking workshops!

Before Khadijeh came to the Netherlands, she worked as a cook for fifteen years. Her dream is to start a Syrian restaurant in the Netherlands: “I would call my restaurant ‘The smell of Sjam (Damascus)’,” she said in an earlier interview with Samen Hier. “We already know that she is a great cook,” agrees one of her Welcome Group members, Froukje. For this workshop, Khadijeh chose a dessert traditionally served in Syria during birthdays or weddings. A perfect Easter dessert for the participants!

Even though most participants did not know each other and they were connected via the screens of their laptop or phone from their own kitchens, the atmosphere was very relaxed and cosy. Everyone was asking questions and there was a lot of laughter, especially when it came to the thickness or “lumpiness” of the substance. Only when it is thick enough, can the next ingredient be added Khadijeh instructed. “Can you take a look?” Asks Femke, as she held her camera over the pan, “because for me it looks more like wallpaper glue …” “Add more milk, keep stirring and lower the fire a bit.”, answers Khadijeh.

After an hour, the workshop was over and the desserts were put into the fridge to be ready in a few hours. Everyone said their goodbyes to each other and promised Khadijeh to send photos once they have decorated their desserts. In addition to a new recipe, some people have also learned a new word: “lumpy”.

“I think the workshop was very successful, what are we going to cook next time?” – Femke 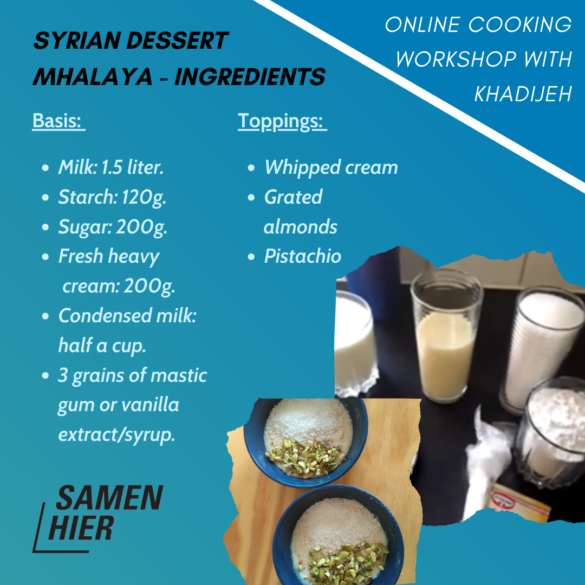 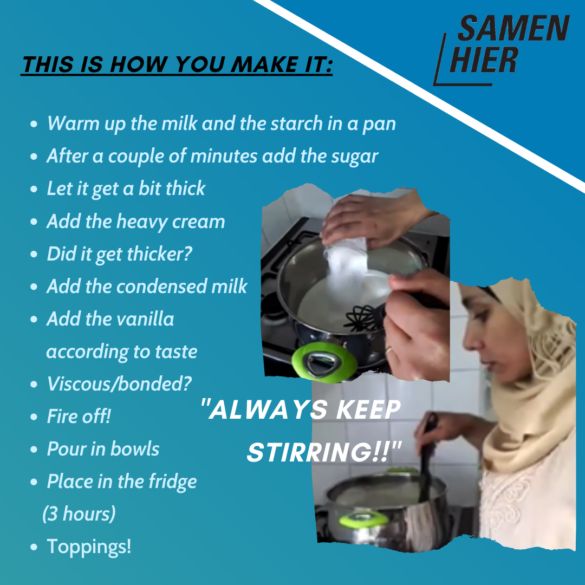