Chasing their dreams, together

How Wael and Rana from Syria work towards a new future with Elleke and four other inhabitants from The Hague.

The doorbell rings. Elleke greets Wael as if they have known each other for years. In reality, it has only been six months since the two met. This was together with the rest of the Welcome Group, as well as Wael’s wife Rana and their two boys. The start of their Samen Hier adventure only felt uncomfortable for a split second, now there is friendship and involvement in each other’s lives. A life in The Hague that is so different from that in Syria, where Wael worked as a constructional engineer and Rana as a teacher. Now, the couple has new ambitions, and is chasing their dreams together with the five members of their Welcome Group ‘De Zinzoekers’ (“The Sense Seakers”) –  tackling every obstacle along the way. Elleke and Wael talk about it at Elleke’s dining room table. 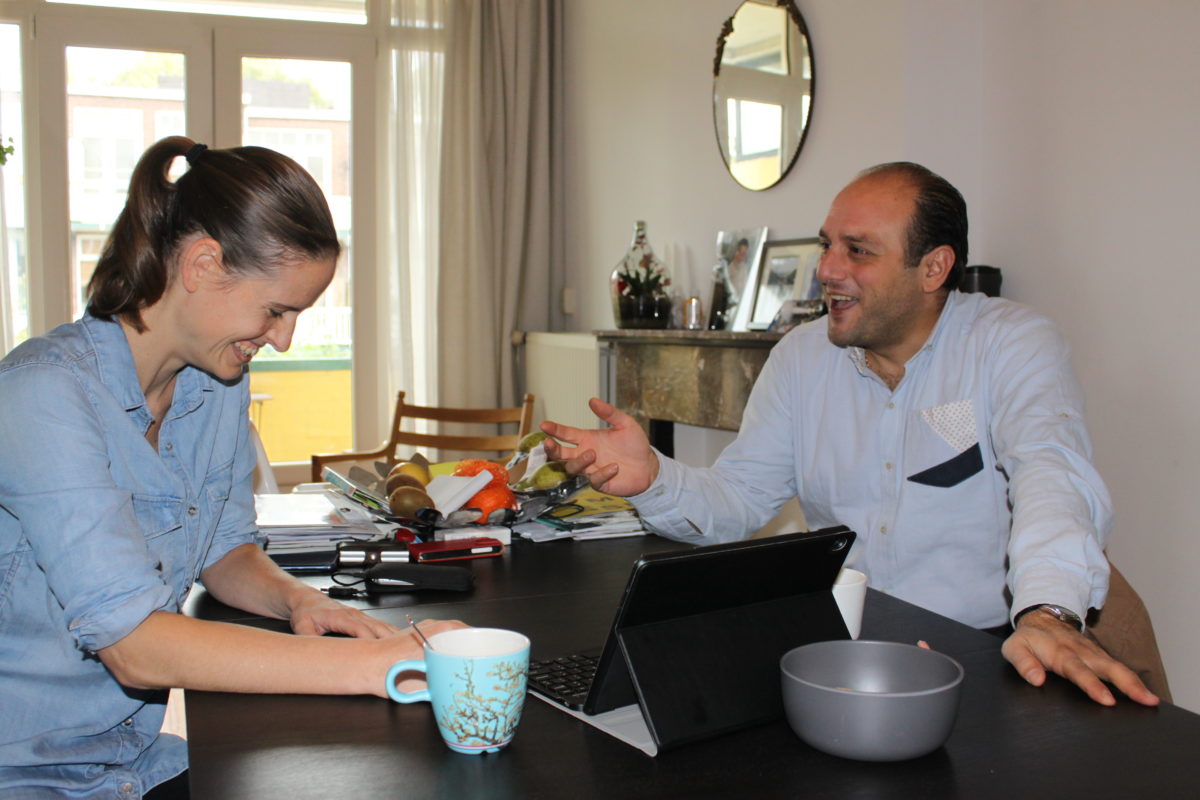 “How I would describe Wael?” Elleke Bal (34) doesn’t need a long time to think: “Very ambitious and welcoming, and he has a great sense of humour”. Wael Yazji (39) chuckles in agreement: “I make a lot of jokes. I even do this right before bedtime, so that we can go to sleep cheerfully.” Wael has only just found out that he will not be able to start his degree in Integral Construction Management at the Hogeschool Rotterdam this year. A missing language certificate – which was not listed as mandatory – stood in the way. It was a hard pill to swallow for the engineer, who had agreed with his wife that they would get a degree before applying to any jobs.

“We want to build a good future for our family”, Wael says. “And a degree will help us do just that.” He will have to try again next year. But to sit around and wait doesn’t fit Wael’s character. He is working hard to find an internship as a BIM modeller. Together with group members Anne-Ruthi and Swana he has updated his CV and made a LinkedIn profile. With Elleke he has searched the internet for suitable internships, and a professional photoshoot  is being planned. Wael has sent out a few application letters, but so far he has only received one response: ‘No positions available due to Corona’. Right after that, Wael received the message that he couldn’t start studying.

Elleke: “It was very frustrating for our group that we weren’t able to do more to help Wael start with his degree. Thankfully, he is a go-getter. Now that Rana is doing a Master’s Degree in French at Leiden University and is teaching at the Gymnasium Haganum, he has taken on the household chores and is taking care of their two sons.” Group member Jeltsje, who is also a teacher, is helping Rana navigate the world of online teaching. It might be a small gesture, but it means a lot to the ambitious couple and their family.

“Always try your hardest”, is what Wael and Rana tell their two boys day in day out. Both come from an entrepreneurial family, and they have learned to work hard from an early age. They try to maintain this attitude in the Netherlands. “I don’t know if we will manage”, Wael says candidly. “We had a good life in Aleppo, and could do anything we wanted. Here, things go very slowly – much more slowly than in Syria. We have to wait a long time for everything. But it is up to us how we deal with our new life. That is something we do have control over.”

Elleke describes the family as optimistic and realistic. “It is very admirable to see how they deal with challenges. First their escape to Lebanon, then to the Netherlands, trying to find work, and now Corona.” Wael says that the last few months were the hardest of his life. “We couldn’t have any contact with anyone. Even during the war this was still possible. At the start of the Corona period, Elleke showed up on our doorstep. So nice – it immediately felt comfortable.” 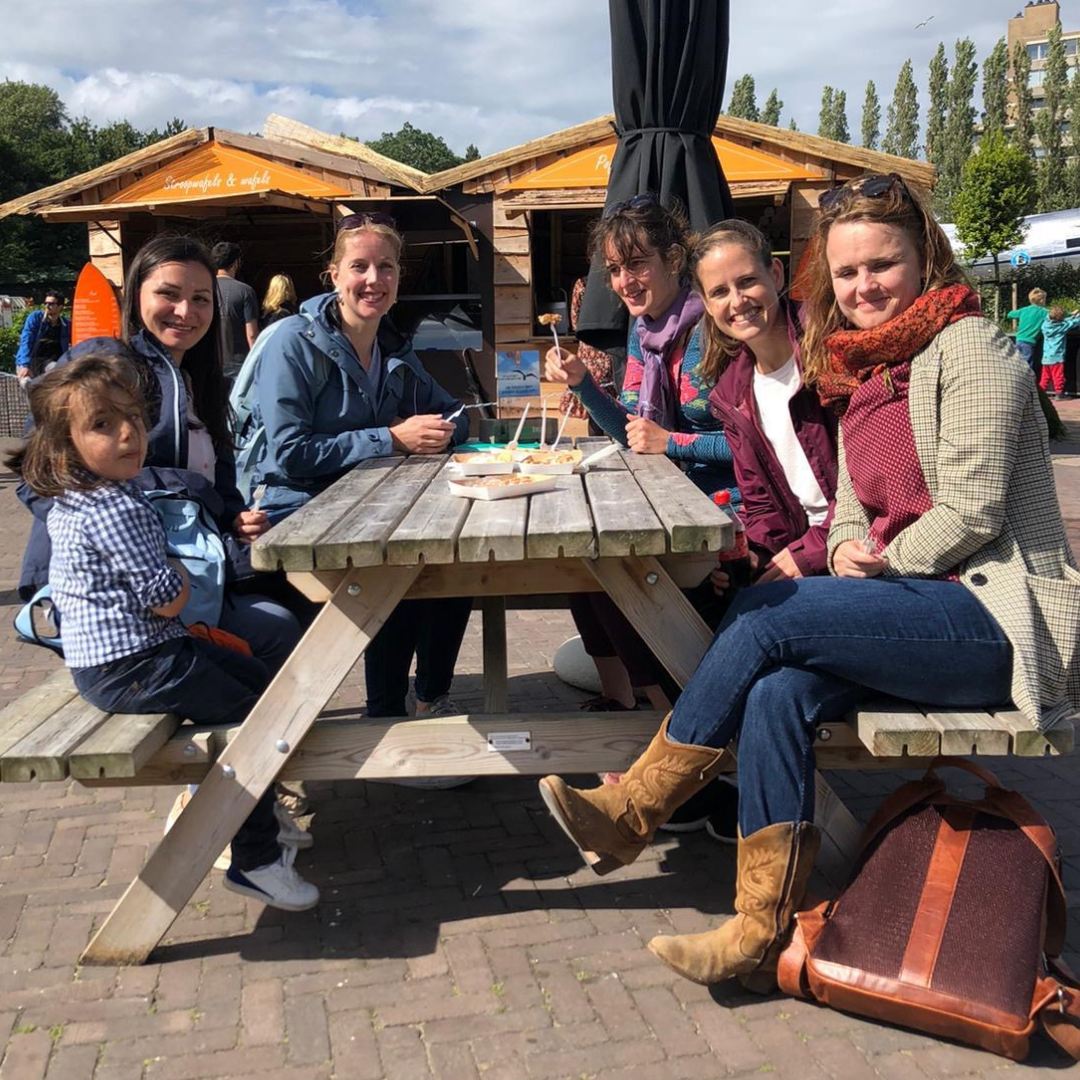 Due to Corona, the group is seeing each other less, and mostly one-on-one, but the contact is warm and good. In July, they all went to the Dutch miniature parc Madurodam together. Eating ‘poffertjes’ and further getting to know the Netherlands. Wael and Elleke have fond memories of that day. Wael’s eldest, George, spotted a painting by Johannes Vermeer and said: “This is a painting by Johannes Vermeer. His most famous painting is ‘Girl with a Pearl Earring’.” Wael: “The kids help us to better understand the Netherlands and the Dutch language. We help each other.”

The name ‘Zinzoekers’ was taken from a network in The Hague, which consists of people in their twenties and thirties who are searching for meaning, and who want to make a positive contribution to the city and to each other’s lives. When Elleke started with Samen Hier, one of her main motivations was to meet people who are different from her. “Now that I have gotten to know Wael and Rana, I realise that, in reality, we are the same”, she says. “We all try to build up a good life. Our cultures are different, but our dreams are the same. I think that the meaning of life is ultimately in how you relate to others, not only how you relate to yourself.”

Wael agrees, and adds: “The most important thing for me is that my kids grow up to be good people. True meaning lies in their happiness, their future. That is what we work for.”

Do you live in The Hague and would you also like to contribute to an inclusive city? Then go to Samen Hier to find out more!
SHARE